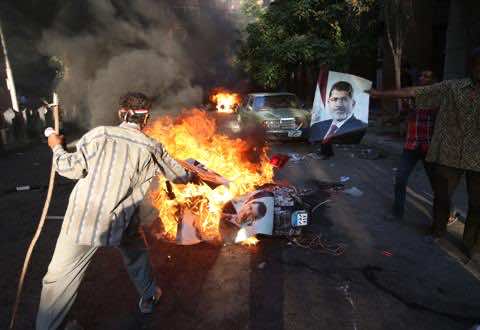 The deadly clashes which also wounded dozens broke out on Monday, raged through the night and were continuing on Tuesday, a day after Morsi’s family vowed to sue the military over his ouster.

At least six people were killed early Tuesday when opponents of Morsi attacked supporters of the deposed president who were staging a sit-in near Cairo University, state media reported.

Morsi’s family told a news conference on Monday they will take legal action against the military for having “kidnapped” the elected president after he was deposed in a military-led coup on July 3.

Egypt’s new leadership says Morsi is in a “safe” place for his own good.

Calls for Morsi to be released have also been issued by the United States, Germany, the United Nations and the European Union which, on Monday, again called for the Islamist leader to be freed.

“It is now of utmost importance that Egypt embarks on a transition, allowing a transfer of power to a civilian-led and democratically elected government,” EU foreign ministers said in a statement.

They listed demands, including “the release of all political detainees, including Mohamed Morsi” — reiterating remarks EU foreign policy chief Catherine Ashton made last week in Cairo.

Morsi’s Muslim Brotherhood movement has also vowed to sustain protests until his reinstatement and refuse to recognise the interim government installed by the military ahead of new elections early next year.

Tuesday’s violence came a day after Morsi’s supporters marched on the US embassy, setting off a gunfight with opponents in the nearby Tahrir Square that killed one protester.

Later in Qalyub, north of Cairo, street battles killed three people, one of them run over by a train as he tried to escape the violence.

As violence billowed, interim president Adly Mansour appealed in a late Monday speech for a “new page in the book of the history of the nation, without rancour, hatred and confrontation.”

But Morsi’s detention, and subsequent arrests of senior Brotherhood leaders, have hardened his supporters against dealing with the new regime.

“We are taking local and international legal measures against Abdel Fattah al-Sisi, the leader of the bloody military coup, and his putschist group,” she said.

Morsi’s son Osama said the family had not heard from him since his overthrow. “None of us has had any contact with our father since the afternoon of the coup on July 3,” he told reporters.

Her spokesman said Pillay specifically requested a list of people arrested in connection with the events of July 3 and beyond, and if they are still in custody and on what legal basis.

Members of the now dissolved upper house of parliament, which had been dominated by Islamists, held a defiant meeting in Cairo’s Rabaa al-Adawiya mosque.

Chanting “Sisi killer,” and anti-police slogans, demonstrators also hung pictures of the ousted president on the gates of the public prosecutor’s office on Monday.

In the bloodiest single incident, at least 53 people died, mostly Morsi supporters, during clashes with soldiers outside the elite military barracks where they believed Morsi was being held.

Violence has also swept the restive Sinai Peninsula, where militants have stepped up deadly attacks on security forces since Morsi’s ouster, including one on Monday that killed a police officer and a civilian.