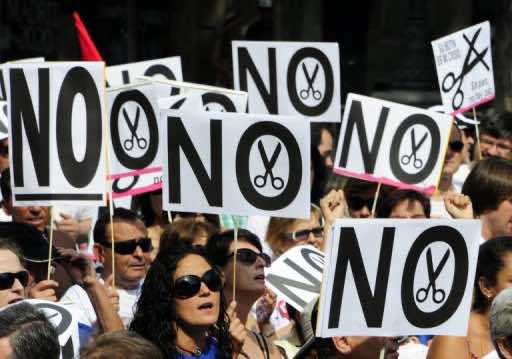 The crisis hit Spanish economy remained in recession in the second quarter but seemed close to a recovery thanks to exports, the Bank of Spain said on Tuesday.

“According to available data, that is still incomplete, we estimate GDP fell by 0.1 percent on a quarterly basis, a yearly drop of 1.8 percent,” the central bank said in a statement.

But the Bank said the contraction had slowed considerably, eased by a boost in demand for Spanish exports which had made a 0.4-percent contribution to the country’s gross domestic product during the quarter.

Spain, the eurozone’s fourth-biggest economy, has been sunk in recession since mid-2011 and officially contracted by another 0.5 percent in the first quarter this year.

But the Spanish government has repeatedly signalled in the past month that the economy is about to get back on track on the wave of resurging exports.

Exports have been a rare bright spot for the Spanish economy which is struggling to recover from a 2008 property crash that has pushed the jobless rate up to a record 27 percent.

But Ben May, economist at London-based Capital Economics, said the economic situation was still fragile and it was too soon to say that the country is on the cusp of a recovery.

“We expect weak demand in Spain’s major export destinations to mean that the boost from the external sector will fade over the coming quarters,” he wrote in a research note.

“And with the fiscal squeeze, housing slump and private sector deleveraging set to continue for some time to come, domestic demand is likely to contract significantly further.”

It now sees the economy shrinking by around 1.7 percent this year, compared to a previous forecast of a 2.0 percent fall, and by as much as 1.5 percent in 2014.