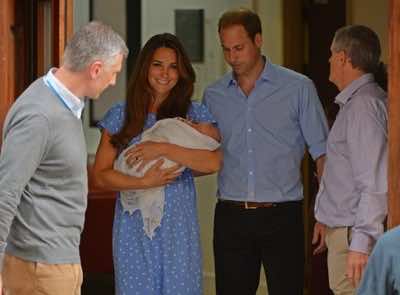 Prince William and his wife Kate emerged from her London hospital on Tuesday and presented their newborn son, a future British king, to the world’s media.

To huge cheers and a frenzy of snapping from the hundreds of waiting photographers, Kate, smiling broadly and wearing a loose-fitting blue dress, walked down the steps holding the boy before passing him to her husband.

“He’s got a good pair of lungs on him, that’s for sure,” William told journalists, while Kate said they were “very emotional” after welcoming their first child, who is third in line to the British throne.

“It’s a special time,” Kate said. “I think any new parent would know what this feeling feels like.” The unnamed baby raised a tiny hand above his white blankets.

William said the baby was “a big boy, he’s quite heavy”, and joked: “He’s got her looks, thankfully.” The couple were “still working on a name”, he added.

After speaking briefly to the press, William and Kate returned to the hospital before re-emerging minutes later with their son in a car seat.

William secured the seat in the back of a black Range Rover parked outside the hospital, before driving his family back to their home at Kensington Palace.