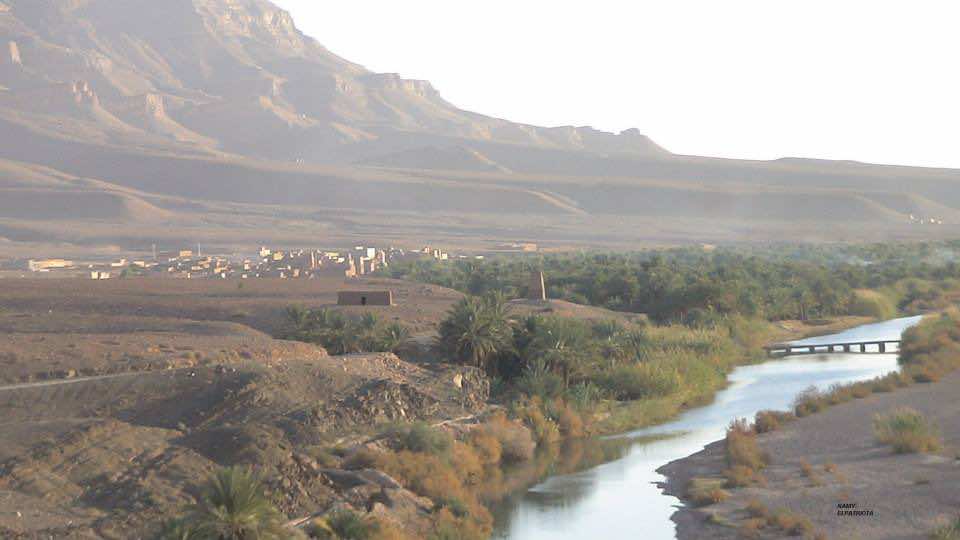 That time, I woke up early. I had looked at the sky. And then I looked at the other side of the river through the window. I was looking at buses and cars that were interrupted by the bray of a donkey going by. It was a cold day but with breezy weather. It was still an hour and half left until breakfast time. My mother had already woken up and she managed, as usual, to go to the orchards to bring the herbs for the sheep and cows. My little brother was still sleeping. He was laughing at my face even though he was asleep. He never looked at the window to the other world. Luckily, he was not tall enough to do so; but he would be able to very soon. I made no noise that might make him up. He was there until the sun burnt his face then he would wake up. As I had finished praying, my mother came out in her traditional dress, scythe in one hand and a piece of case in the other. It was a very nice morning. The vapor from amalal (the traditional kitchens) was scattered over the whole town; the smell of broth could be tested everywhere. People came out of their houses one by one like squirrels. Most of them, if not all, went to Igran (orchards); there life would be.

As I accompanied my mother to the orchards, a very deep attractive silence appealed to me to go ahead and goroaming across the orchards. But there was a furious sound of barking. It was of dogs. Dogs my mother feared too much. In fact our region was of countless dogs, but let them be. No way. I remembered her meticulous advice that she told me once. “Look my son; life is of difficulties; everybody has his raison d’être which he is made to fulfill but enemies and dogs are always barking at him. So never ever gaze at barking dogs; they are less mighty once you neglect them, however numerous they are.” I could not understand why she feared dogs and at the same time inspired me with encouragement and confidence.

Once my mother dispersed, got into the orchard, and hid behind the tall corn, I went to the river side. On my way to the river, I came across four girl-students but did not talk to them. They kept gazing at me. They were shivering from the cold. They were crossing the deep dark river, but they were happy. The school was six kilometres from their hometown. I could not control my anger after witnessing that scene of young girls crossing the lethal deep river of Draa. Abruptly I came back to the orchard. I sat under a date palm. I tried to contemplate the advice of my mother; I thought of it fastidiously and for a long time…. She was right. Dogs. She meant perhaps the ones with did not bark sound but that would bite at any occasion.

Tamellalte was bitten. I was really obsessed in my mind with many problems facing it. Tamellalte was really a forgotten town. I could not do more than confess that we had not yet been treated as human beings. WE WERE FORGOTTEN. I always asked some questions which drove me crazy; they should be answered however. What was the problem with those innocent students crossing the river? Why were we not able to have the infrastructure like those on the other side of which my little brother was not aware? Why the mitigating, undermining, neglecting, forgetting and dehumanising of us? Were those pregnant women who were in labour and were taken on mule-back doomed to death just because they were on the other side –the forgotten side- where technology and means of transportation were of negligible importance? I would never forget the woman who wanted to give birth to a child, was in labour, and went to the hospital on her feet; at the end, a nurse told her that she was not in labour and accordingly not about to give birth; she left the hospital, felt giddy and gave birth luckily in the house of a woman she had been acquainted with before.

Who was to blame? Of course, the one who was not a part of the problem could be a part of the solution. We wanted to feel that we were human. Who would change our status quo? Was it my mother who still believed that we were born to be so? Or was it the leader of the region who outsmarted and flattered people and described them as generous, benign, patient, and the like? I could not swallow at ease what I had been told that some girl-students on their way to the school were blackmailed and racially taunted as well as sexually harassed by the gangs. The other scapegoat was the one who came to celebrate the Eid (a religious holiday) with his family; he unfortunately was stoned and laid sick for three weeks. Circa 2000, Tamellalte did not have a concrete bridge; they had a bridge made of the logs of date palms. Once there was flood, the whole town would be isolated.

Out of the blue, my mother arrived from the orchard with a heavy load of herbs. She could read wrath in my face. She asked about what made me pale. I said “Dogs mom,” “Dogs mom,” “Dogs mom.” “But I did not hear their bark,” said my mother. You were made to hear them mom and because you were forgotten and in a forgotten town.