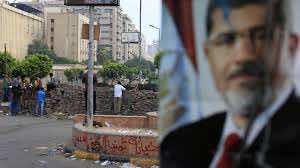 Gas-rich Qatar, a strong backer of Arab Spring uprisings and supporter of ousted Egyptian president Mohamed Morsi, has joined international calls for his release from detention while expressing concern at violence sweeping Egypt.

State news agency QNA late yesterday quoted a foreign ministry official as saying Qatar had voiced ‘concern over the developments in Egypt, especially with the increasing number of civilian victims’.

It said it was ‘surprised by the continued detention of elected president Mohamed Morsi which threatens the achievements made by the 25 January (2011) revolt’ that forced former Egyptian ruler Hosni Mubarak out of office.

Since the army deposed him on July 3, Morsi and several of his top aides, including leaders of the Muslim Brotherhood, have been held in detention.

Egypt’s interim leaders have said Morsi is being kept in a ‘safe place’ for his own good.

Soon after Morsi’s ouster, Qatar cautiously welcomed Adly Mansour who was appointed by the Egyptian army as the interim president.

The Qatari foreign ministry official, who was not named, called for ‘a political solution based on national unity dialogue’ to resolve the political crisis in Egypt.

But this ‘cannot be achieved in the absence of one of the parties in the dialogue and the continued arrest of its symbols,’ the official said.

The toppling of the Islamist president has sparked violence in Egypt in which more than 100 people have died.

Much of the unrest has involved street clashes between Morsi’s opponents and supporters of his Muslim Brotherhood movement, which is backed by Qatar.

The United States, Germany, the United Nations and the European Union have all called for Morsi’s release.

‘It is now of utmost importance that Egypt embarks on a transition, allowing a transfer of power to a civilian-led and democratically elected government,’ EU foreign ministers said on Monday.

They listed demands, including ‘the release of all political detainees, including Mohamed Morsi’.