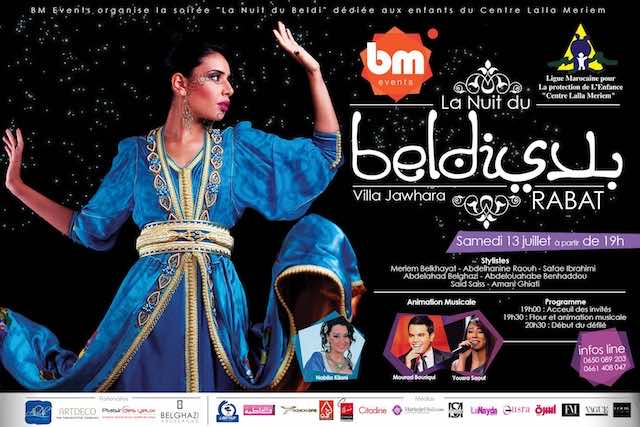 On July 13, Princess Lala Zineb inaugurated BM Events’ first event in Morocco at Villa Jawhara in Rabat, alongside its founder Yassine Abouyaala and many influential political and artistic figures from Morocco and abroad.

On this occasion, BM Events organized, in collaboration with a number of media agencies, its first event entitled, “La Nuit du Beldi” (an evening of traditional attire), for the benefit of Lala Meriem Center for Children Protection.

The goal was to bring awareness to the needs of these children in hopes of granting them the help and attention they need. Nabila Kilani hosted the event with a number of honorary guests, namely Moroccan actress Latifa Ahrar, the actress Wassila Subhi, Anas al-Baz, Farid Rajraji and the journalist Imane Kada.

In an atmosphere typical of the holy month of Ramadan, the invitees broke their fast right before the kick-off of the sublime fashion exhibition planned for the event.

The ceremony also featured singing performances, offered by two talented young Moroccan singers, Yousra Saouf, one of the most fascinating voices who participated in Arab Idol’s second edition, and Mourad Bouriki, the winner of The Voice’s previous edition.

When Yassine Abouyaala was asked about his impressions on the even the told MWN, “I am so delighted and particularly honored by the presence of HH Lala Zineb. I would like to congratulate the BM Events team thanks to whom the hard work paid off greatly.”

“I hope that the people who attended the event will visit the Center to give hand to these children. They do need our help,” he added.