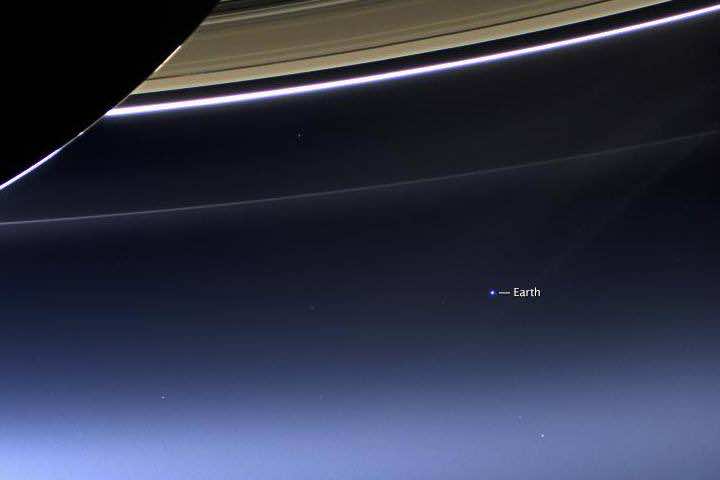 On July 19, the earth was photographed from a remote distance of 1.5 billion kilometers, a close proximity to Saturn, by NASA craft Cassini. The colored images show the earth like a grain of sand in a vast desert. The planet whose population number now is estimated at 7109243900 (about 7.109 billion) and on which these people fight, wage wars against each other, hanker after power and crave domination looks so tiny and valueless! It’s touching to realize that Man’s size in this constantly expanding universe is almost nothing, yet out of cheer vanity and arrogance he flaunts and brags about power and prowess.

Cassini project scientist at NASA’s Jet Propulsion Laboratory in Pasadena, Calif, Linda Spilker summed it up saying: “We can’t see individual continents or people in this portrait of Earth, but this pale blue dot is a succinct summary of who we were on July 19. Cassini’s picture reminds us how tiny our home planet is in the vastness of space.”

What’s even more special about the images of the earth taken from Saturn’s orbit is that at the time Cassini’s camera was taking the pictures more than 20,000 people from around the world were looking up at the sky, waving at the camera and saying “cheese.” On June 18, Linda Spilker launched a call under the name “Wave at Saturn” inviting people to celebrate this event: “We think Cassini’s July image is a special opportunity for Earthlings to wave at our photographer in the Saturn system and learn more about my favorite planet, its rings and moons. We hope you’ll go outside, look in the direction of Saturn and send us pictures of yourselves waving,” said Linda Spilker.

It should be noted that images of the earth from the outer solar system are very rare as there have been only two images since humans have been venturing out into the space. The first and most distant was taken 23 years ago by NASA’s Voyager 1 spacecraft from 4 billion miles (6 billion kilometers away) and the second was Cassini’s image in 2006 from 926 million miles (1.49 billion kilometers).