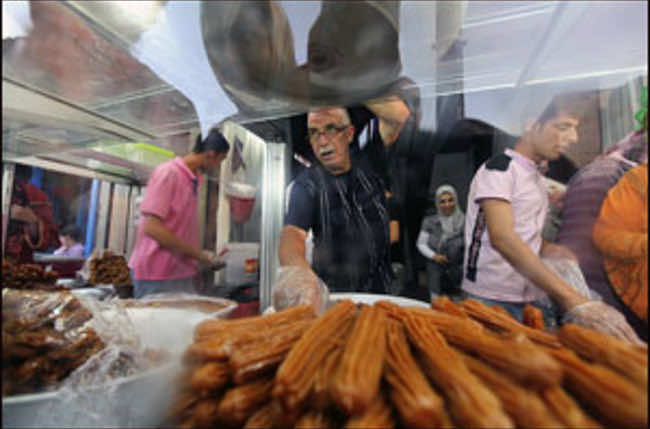 While many Moroccan youths focus on spiritual development during Ramadan, others use the occasion to have fun or take the opportunity to boost their income.

It is a month like no other, with its own special atmosphere and business patterns. To pass the time during this holiday period, some young people play sports and seek ways to have fun during the day and night.

That’s what 21-year-old student Hamza Chenaoui does. “It’s an ideal opportunity to play team sports and forge closer ties with friends and neighbours. We also play chess, cards… And we try to help each other out,” he said.

Other people prefer to focus on the spiritual aspects of the month by going to mosques and attending religious classes. Hatim Cherif, who is 24, has taken time off so that he can “strengthen his faith”. He sees Ramadan as an opportunity to revitalise his soul and find serenity and inner peace.

“This also encourages people to be kind to the less well-off. They become more inclined to help each other out. It’s a spirit that ought to continue after the end of the month,” he said.

He was critical of people who only change their behaviour during Ramadan, saying “some young people transform themselves completely. They undergo a total personality change, but for one month only. I find this attitude hypocritical.”

But sociologist Samira Kassimi said the change in behaviour should be seen in a positive light.

“Many Moroccans become more altruistic than usual. For some people, it’s an opportunity to stop smoking and drinking,” she pointed out. “Of course, we must think about how these positive behaviour changes can be made to last beyond Ramadan. The media has an important role to play in raising awareness.”

Some young people have their sights set firmly on business during this month, which is an ideal time to sell things – especially food items due to the increase in consumption and change in people’s eating habits.

Rachid Taki, a 32-year-old trader, stops selling clothes – his main line of work during the rest of the year – and instead sells dates, which are consumed in large quantities during Ramadan.

“During Ramadan, I can earn three times what I normally make in a month. I would have hoped that this prosperity will last throughout the year,” he said.

That view was shared by Hiba Cherrati, a 20-year-old student. For the second year running, she has rented a small outlet in Temara so that she can sell cakes and biscuits, which she makes with the aid of her 18-year-old sister.

“We manage to make an amount that enables us to take a holiday and buy things for the start of the new school term. That makes things easier for our parents,” she said.

The change in consumer behaviour with increased spending on food during the holy month boosts the economy, according to economist Mehdi Ziani. “So casual business activities emerge, but they disappear as soon as the month ends,” he said.