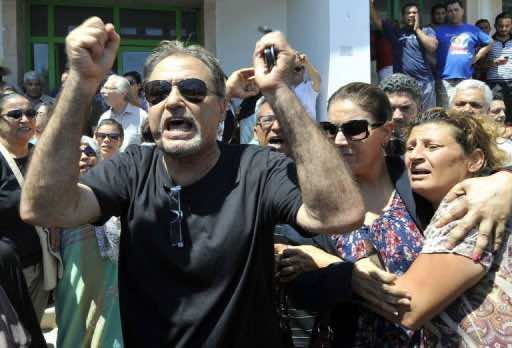 A leading critic of Tunisia’s ruling Islamists, MP Mohamed Brahmi, was shot dead outside his home Thursday in the second such assassination this year, with fingers again pointed at the authorities.

The murder by unknown gunmen sparked angry street protests in central Tunis and the top opposition figure’s birthplace of Sidi Bouzid for which he was an MP, AFP correspondents said, as well as a call for a general strike on Friday.

“Mohamed Brahmi, general coordinator of the Popular Movement and member of the National Constituent Assembly, was shot dead outside his home in Ariana,” near Tunis, Watanya state television and the official TAP news agency reported.

“He was riddled with bullets in front of his wife and children,” Mohsen Nabti, a fellow member of the small leftist movement, said in a tearful account aired on Tunisian radio.

The interior ministry, cited by TAP, said that Brahmi, a 58-year-old MP and vocal critic of Tunisia’s ruling Islamists, was assassinated as he left home.

Watanya said Brahmi was struck by a hail of 11 bullets fired from point-blank range.

The February 6 assassination of Chokri Belaid, another opposition figure, also outside his home, sparked a political crisis in Tunisia and charges of government connivance. 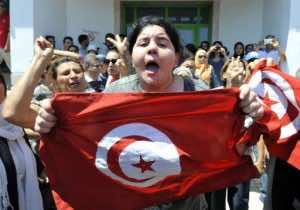 The family of father-of-five Brahmi swiftly charged that ruling Islamist party Ennahda was behind both murders.

“I accuse Ennahda. It was them who killed him,” the MP’s sister Chhiba Brahmi told AFP at the family home in Sidi Bouzid, without providing any evidence.

“Our family had the feeling that Mohamed would suffer the same fate as Chokri Belaid,” whose family also blamed the authorities, she said.

Ennahda chief Rached Ghannouchi in a statement to AFP rejected the charge, calling Brahmi’s killing “a catastrophe for Tunisia”.

“Those behind this crime want to lead the country towards civil war and to disrupt the democratic transition,” he said.

Both UN human rights chief Navi Pillay and Amnesty International demanded an investigation into the killing.

Brahmi, a man with a bushy moustache and weather-beaten complexion, was elected MP for Sidi Bouzid in October 2011, birthplace of the revolution earlier that year that toppled president Zine El Abidine Ben Ali.

On July 7, he resigned as general secretary of the Popular Movement, which he founded, protesting that it had been infiltrated by Islamists.

“Tunisia is free, Brotherhood out!” angry demonstrators shouted in Tunis on Thursday, referring to the Muslim Brotherhood-linked Ennahda. 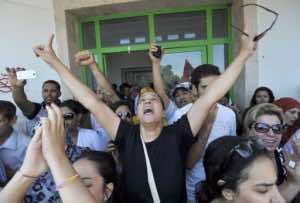 Police fired tear gas to disperse scores of demonstrators who had gathered in front of the interior ministry in Tunis, installing a tent for a night-time sit-in, and calling for the fall of the regime.

In Sidi Bouzid, crowds chanted “Down with the Brothers, down with the people’s torturers!”

Thousands also took to the streets of nearby Menzel Bouzaine, where Ennahda party offices were set ablaze.

Prime Minister Ali Larayedh, himself an Islamist, condemned the latest murder and vowed to track down the perpetrators, but also deplored the subsequent protests and civil disobedience calls.

“I condemn in the strongest terms this odious crime which targets the whole of Tunisia and its security,” he told reporters, while urging calm.

“This drama must not be exploited to sow trouble,” he said. “Only minutes after news of the murder was announced, calls were made inciting Tunisians to kill each other.”

President Moncef Marzouki said the killing was aimed at derailing the Arab Spring, and called it a “second national catastrophe” after Belaid’s murder.

The United States condemned the assassination, saying there was “no justification for such outrageous and cowardly acts in a democratic Tunisia”. .

President Francois Hollande of France, the pre-independence colonial power in Tunisia, called on the country to unite.

He urged “all political and social forces in Tunisia to demonstrate more than ever the spirit of responsibility needed to preserve national unity and to guarantee the continuation of the democratic transition”.

France’s leader called for “light to be shed as quickly as possible” on the murders of both Brahmi and Belaid.

On Wednesday, a minister and senior adviser to Larayedh said six people believed to have orchestrated Belaid’s killing have been identified.

The General Union of Tunisian Labour (UGTT) called for a general strike across Tunisia on Friday in protest at “terrorism, violence and murders”.