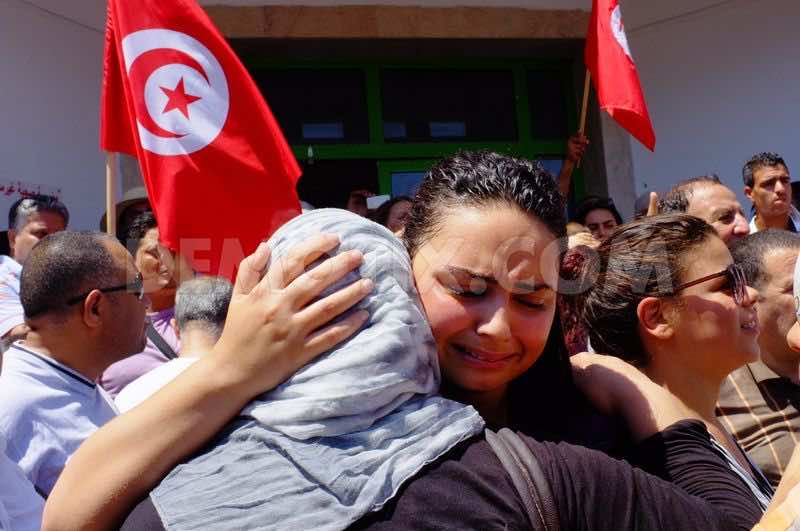 A teenage daughter of Tunisian politician Mohamed Brahmi who was gunned down in broad daylight recounted Friday how he was slain by two men in black T-shirts on a scooter.

“At around midday, we heard gunfire and my father crying with pain. We rushed out — my  brother, mother and I — to find his body riddled with bullets at the wheel of his car parked in front of the house,” a red-eyed Balkis Brahmi told AFP.

“Despite the horror of it all, I spotted two men fleeing on a scooter, in black T-shirts and wearing helmets, one red and the other beige,” said the 19-year-old woman, one of Brahmi’s five children.

“Local police took a long time coming and a neighbour took my father to hospital, where he died. He lived as a man of principle and has left us a martyr,” she said, fighting back tears.

Balkis Brahmi said her father was preparing to step down from parliament because “he did not want to vote on a constitution aimed at consecrating a military dictatorship”.

“My father was a true Arab nationalist,” she said.

Her brother Adnan, 23, wearing the emblematic Palestinian keffiyeh chequered headscarf, said he had read the Muslim last rites to his father before he lost consciousness slumped in the car.

The state prosecutor’s office, meanwhile, said an autopsy found that Brahmi, whose family and political colleagues said he was to be buried as a “martyr” on Saturday in a Tunis cemetery, had been mowed down by a hail of 14 bullets.

Human Rights Watch said Adnan Brahmi had told its researchers he heard a first and a second gunshot, then several other shots as if from a machinegun.

Tunisian Interior Minister Lotfi Ben Jeddou said on Friday that Brahmi and Chokri Belaid, another opposition figure who was murdered back in February, were gunned down with the same weapon.

“The gun used to kill Mohamed Brahmi is the same as that used to kill Chokri Belaid” six months earlier, he told a press briefing.