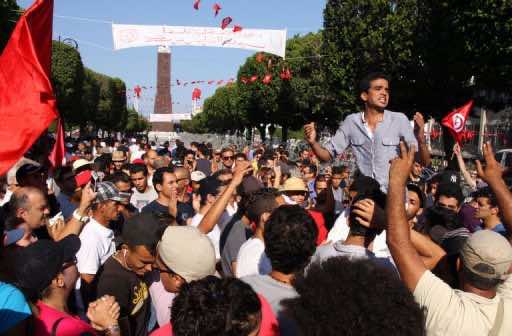 Tunisia marked a day of mourning on Friday after gunmen killed a leading opposition figure, sparking fresh political turmoil, protests and a general strike which brought Tunis to near standstill.

MP Mohamed Brahmi, 58, of the leftist and nationalist Popular Movement, was assassinated outside his home in Ariana, near Tunis, by gunmen on a motorbike, witnesses said.

The state prosecutor’s office said an autopsy found that Brahmi, whose family and political colleagues said he was to be buried as a “martyr” on Saturday in a Tunis cemetery, had been mowed down by a hail of 14 bullets.

Balkis Brahimi, 19, one of his five children, said her father was killed by two men in black on a motorbike.

“At around midday, we heard gunfire and my father crying with pain. We rushed out — my brother, mother and I — to find his body riddled with bullets at the wheel of his car parked in front of the house,” the red-eyed young woman told AFP.

“Despite the horror of it all, I spotted two men fleeing on a scooter, in black T-shirts and wearing helmets, one red and the other beige,” she said.

“Local police took a long time coming and a neighbour took my father to hospital, where he died. He lived as a man of principle and has left us a martyr,” she said, fighting back tears.

Human Rights Watch said that Brahmi’s son, Adnen, had told its researchers he heard a first and a second gunshot, then several other shots as if from a machine gun.

As news of the killing spread, thousands of angry protesters took to the streets Thursday in central Tunis and in Sidi Bouzid, birthplace of the Arab Spring and Brahmi’s hometown.

Police in Tunis fired tear gas to disperse scores of demonstrators who tried to set up a tent for a sit-in calling for the fall of the regime after the second such slaying of a critic of the country’s Islamist leadership.

Tunisian newspapers on Friday forecast a destabilisation of the country, with La Presse warning of “a slide into hell”.

“Rather than isolated acts, violence is being turned into a system. By whom? By people determined to seize power or to stay in power,” Le Quotidien said, pointing a finger of blame at the government led by the moderate Islamist movement Ennahda.

According to analyst Sami Brahem, “the reasons behind the assassination of Chokri Belaid are the same as those which led to the murder of Mohamed Brahem: to bring about the failure of the democratic transition.”

The February 6 assassination of Belaid, another opposition figure, also outside his home, sparked a political crisis in Tunisia and charges of Ennahda involvement.

Beji Caid Essebsi, head of the main opposition party Nidaa Tounes, said Ennahda was to blame because it had failed to identify the killers of Belaid. “There has not been any serious judicial action,” he told AFP.

The General Union of Tunisian Labour (UGTT), which says it has half a million members, called Friday’s general strike in protest at “terrorism, violence and murders”.

UGTT deputy secretary general Sami Tahri reported that all sectors across the country were observing the strike, singling out banks, health services and most public transport.

The Tunisian presidency, meanwhile, told AFP that Friday would be observed as a day of national mourning “following the assassination of lawmaker martyr Mohamed Brahmi”.

But like after the Belaid murder, Ennahda was back in the firing line of accusations.

“I accuse Ennahda,” the MP’s sister Chhiba Brahmi told AFP at the family home in Sidi Bouzid. “It was them who killed him,” she said.

Ennahda chief Rached Ghannouchi rejected the charge in a statement to AFP.

Brahmi’s killing was “a catastrophe for Tunisia”, he said. “Those behind this crime want to lead the country towards civil war and to disrupt the democratic transition.”

Political tension has been rising in Tunisia, with the launch of the country’s own version of the Tamarod (rebellion) movement launched in Egypt that led to the ouster of Islamist president Mohamed Morsi on July 3.

Brahmi was elected MP in October 2011 for Sidi Bouzid, birthplace of the revolution earlier that year that toppled president Zine El Abidine Ben Ali. On July 7, he resigned as general secretary of the Popular Movement, which he founded, saying it had been infiltrated by Islamists.