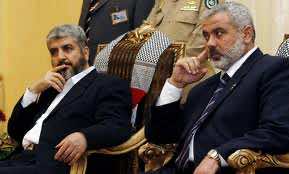 Below are the main developments in relations between Egypt and the Palestinian Islamist movement Hamas since 2007:

– June 15, 2007: Hamas takes control of the Gaza Strip after ousting forces loyal to the Fatah party of Palestinian president Mahmud Abbas following a week of clashes.

President Hosni Mubarak’s regime, which has tried in vain for a month to bring Palestinian factions around the table, criticises Hamas for “seizing power” in Gaza and recognises only Abbas’s Palestinian Authority as “the single and legitimate representative of the Palestinian people”.

Since the Israeli withdrawal from the Gaza Strip in September 2005, Egypt has played a key role in the Palestinian territory which it administered for nearly 20 years up to its defeat in the 1967 Middle East war.

– June 21, 2007: The Muslim Brotherhood, the main opposition group in Egypt, and of which Hamas is a product, rises up against the unreserved support given by the Egyptian government to Abbas.

Egypt’s foreign ministers says Cairo maintains contact with Hamas in spite of it taking power by force in Gaza.

– January 23, 2008: The Gaza-Egypt border is blasted open by Islamist militants in a bid to break the Israeli blockade of Gaza, allowing the stampede by hundreds of thousands of Palestinians into Egyptian territory to stock up on supplies. The frontier is closed again ten days later.

– February 11, 2011: Scenes of jubilation across the Gaza Strip after Mubarak’s resignation following an 18-day popular uprising in the wake of the Arab Spring.

– April 27, 2011: Post-Mubarak Egypt sponsors a reconciliation accord between the two main Palestinian movements, Fatah and Hamas, after more than 18 months of negotiations. The Mubarak regime had attempted mediation between the Palestinian Authority and Hamas, on which it had blamed the failure of its reconciliation efforts. The accord, initialled on May 4, has not so far been implemented.

– May 28, 2011: The permanent reopening of Egypt’s Rafah terminal to ease the Israeli blockade of Gaza, where the border passage had previously only been opened in exceptional cases.

– October 19, 2011: Israeli soldier Gilad Shalit, who has been held for more than five years by Hamas and other militants, is freed in return for several hundred Palestinian prisoners held in Israel in the framework of an accord struck under Egyptian mediation.

– November 21, 2012: The international community hails Morsi’s crucial efforts for a ceasefire after a week of clashes between Israel and Palestinian armed groups in the Gaza Strip.

– July 5, 2013: Gaza’s Hamas rulers appeal for faith in the Arab Spring despite Morsi’s ouster by the army. On the 8th, they condemn the “massacre” of dozens of people demonstrating against the military coup.

– July 26, 2013: An Egyptian court orders Morsi detained for questioning over suspected collaboration with Hamas, a decision condemned by the Muslim Brotherhood and the Palestinian movement.