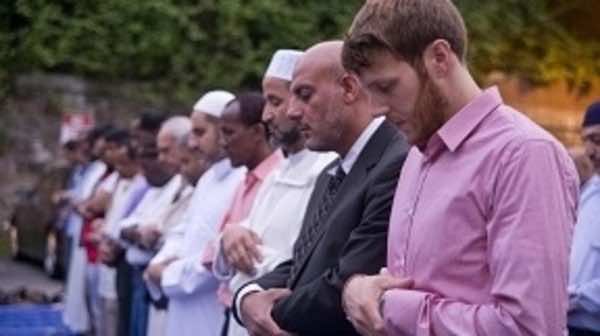 Millions of Muslims gather across the United States daily, whether with friends, family or both, to break their fast during the holy month of Ramadan. The tradition has become a routine exercise for most. But, for one particular group of Muslims, the nightly gatherings are their chance to engage with others that share their same religion.

There are roughly 36,000 Muslim converts living in the United States, according to a 2011 Pew Research Center study. The converts, much like the rest of the near two million Muslims in the United States, live in different parts of the country, hold different jobs and have varying degrees of devotion to the faith. But, it seems, that Ramadan is able to bring together the communities of Muslims, whether born or converted.

This sense of community in the name of a shared religion is evidenced in a group of Muslim converts that gathered right outside of Washington, DC this week to speak about their varied experiences, particularly during this month of Ramadan.

“Ramadan has been a very solitary experience for me,” said Britain Eakin, who converted to Islam two years ago. She says that because she is new to the DC area, she is not linked into the greater Muslim community.

But, for others that have a more established base within their local Muslim communities, Ramadan is a time of socialization and gathering.

“Ramadan, for me now, as I’ve become more familiar with the options available and the Ummah in my area…is probably the best time of year for me because I get to see friends and fellow Muslims every single day, either to break fast at someone’s house, or to a masjid,” said Lauren Arnold, who converted to Islam more than 10 years ago.

The fasting days in the summer months are long. Work in the United States, for the most part, will not be augmented to accommodate observing Muslims, which only increases the hardship.

“It’s more of a struggle here than in other countries” that are Muslim majority, Lauren said. “I don’t have a family at home, really, that I can share my faith with.”

The concept of being a Muslim convert is a confusing and trying one for some, particularly if they choose to convert separate of their families. During months such as Ramadan, where an emphasis is placed on uniting the Muslim “Ummah,” it could be a tough, and often, lonely, time for Muslim converts living outside of a Muslim majority country.

“Support is lacking throughout the community,” said Courtney BreAnna Rupert, who converted to Islam one year ago. For Courtney, she says establishing an emotional and spiritual connection with the meaning of Ramadan does not come instantaneously. “I think it comes from years of experience to fully comprehend what Ramadan truly means.”
In an effort to alleviate grievances against the lack of a support structure for Muslims, organizations such as MakeSpace were founded. MakeSpace is a Washington DC-based initiative that is aimed at providing an “inclusive, responsive and transparently-managed hub” for local Muslims.

“What we’ve been able to do with make space is give people an opportunity to understand Islam through their own experience and perspective… we want to help them come to Islam and strengthen their faith based on where they are, without being judgmental,” said Hasan Shah, the organizer of MakeSpace.

“There is a huge difference” between people who are born Muslim and who have converted, said Dearing Keyser, who converted to Islam 11 years ago, and is married to an Egyptian Muslim man. “As a convert, you’re kind of looked at as an outsider,” she said.

But, Dearing maintained that outside judgments do not sway her faith, or her image of herself. “I’m an American first, and I’m Muslim.”

A 2007 Pew Research study showed that 58 percent of converts converted for religious reasons, while 18 percent converted for family or marriage reasons. Whatever the reasoning may be, it seems that the community of Muslim converts, at least in the Washington, DC area, are making a effort to unite among themselves, and the greater Muslim community—particularly during occasions such as the holy month of Ramadan.