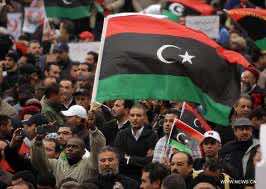 Thousands of Libyans protested on Saturday against parties including the Muslim Brotherhood blamed for a wave of violence a day after a series of deadly attacks in the east.

Protesters ransacked offices of both the Brotherhood’s political wing the Party of Justice and Construction (PJC) and its liberal rival the Alliance of National Forces (NFA).

In Benghazi, youths stormed and ransacked the building housing the PJC, after hundreds took to the streets overnight to denounce the assassination of Abdessalem al-Mesmari, an anti-Islamist lawyer who campaigned for a civil state.

The demonstrators accuse the Brotherhood of being behind killings that have targeted dozens of officers, especially in Benghazi, cradle of the 2011 armed uprising that ousted dictator Moamer Kadhafi.

In Tripoli, hundreds of people gathered on Saturday at Martyrs’ Square in the heart of the capital to demonstrate in “solidarity with Benghazi” and against the Islamist movement.

Chanting “the blood of martyrs was not shed in vain,” the protesters converged on the square as they left mosques after morning prayers, an AFP correspondent reported.

About 100 youths then descended on the PJC offices in the Ben Ashur district, smashing its windows and looting furniture.

From the outset, the demonstrators chanted slogans against the Muslim Brotherhood, but they later also targeted the NFA which won July 2012 elections.

Around 100 protesters converged on the alliance’s offices in the Hay al-Andalus neighbourhood, invading the premises and throwing documents out of windows.

“We want all political parties to be dissolved,” said one protester, Ahmed Trabelsi.

“They’re the cause of all our problems. First we need a constitution, then laws regulating political life before parties can begin operating,” he said.

The PJC and NFA are accused of manipulating the militias left over from the revolution that toppled Kadhafi in a country still awash with weaponry not in state hands.

NFA leader Mahmud Jibril was an economic adviser to the Kadhafi regime in its final years, before joining the revolution in 2011 and briefly serving as premier.

The NFA has 39 out of the 80 seats reserved for political parties in the 200-seat General National Congress, the country’s highest political authority, while the PJC has 17.

The remaining 120 seats are held by independents.

Mesmari was shot dead as he left a mosque in Benghazi on Friday as an army and a police officer were also killed in separate attacks in Libya’s restive second city, a security official said.

The prominent activist was among the first Libyans who launched the 2011 uprising. He helped found the political wing of the rebel movement that later overthrew Kadhafi’s regime.

After the revolution, he took a prominent stand against the Brotherhood, which he accused of striving to take power in Libya despite popular discontent.

Since Kadhafi’s overthrow and murder, eastern Libya has been hit by bombings and a series of assassinations and attacks on judges, the military and police who served under the dictatorship.

Western interests have also been targeted.

On September 11 last year, Islamist militants attacked the US consulate in Benghazi, killing ambassador Chris Stevens and three other Americans.