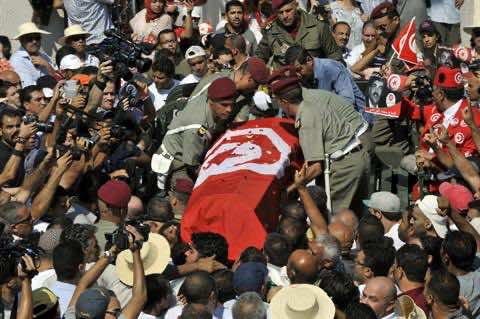 Thousands of Tunisians took to the streets Saturday for the funeral of an opposition leader assassinated with the same weapon that killed a colleague, as tensions soared after anti-government protests.

Draped in the red and white Tunisian flag, Mohamed Brahmi’s coffin was saluted by soldiers as the cortege left his home in the Tunis neighbourhood of Ariana for El-Jellaz cemetery.

Emotions were high as supporters of Brahmi, who included members of his family, lifted the coffin to their shoulders before carrying it away under armed escort.

A military helicopter overflew the capital as a sea of flags fluttered among the crowd waiting for the funeral procession along Mohamed V Avenue, an AFP correspondent reported.

“For our soul, with our blood, we will avenge the martyr,” the crowd shouted in unison.

Brahmi, 58, was shot dead outside his home on Thursday with the same weapon used to gun down fellow opposition politician Chokri Belaid in February, Interior Minister Lotfi Ben Jeddou said.

He will be buried next to the grave of Belaid, in line with a wish he had expressed before his death.

Brahmi’s state funeral was being held in the absence of any representatives of the government led by the Islamist Ennahda party.

Hours before the funeral got under way, a bomb exploded near a police post in the port of Tunis on Saturday, damaging a police jeep, the interior ministry said.

A resident said the blast, the first known attack of its kind against a military vehicle in Tunisia, slightly wounded a policeman and caused panic among some residents of La Goulette district.

The ministry said nobody was hurt.

The bombing comes a day after a general strike and an anti-government demonstration during which one person was killed.

Brahmi was an MP with the leftist and nationalist Popular Movement but on July 7 quit the party he founded, saying it had been infiltrated by Islamists.

His widow Mbarka told AFP he would be buried next to Belaid, the leftist politician assassinated in February whose funeral was attended by tens of thousands and turned into an anti-Ennahda protest.

The families of both men have accused Ennahda of being implicated in the deaths, but the authorities said Friday the investigation pointed to extremists with links to Al-Qaeda.

The powerful General Union of Tunisian Labour, or UGTT, called Friday’s general strike in protest at “terrorism, violence and murders”, while national airline Tunisair and some European carriers cancelled flights to Tunis.

The state prosecutor’s office said an autopsy found Brahmi had been hit by 14 bullets.

Balkis Brahmi, 19, one of Brahmi’s five children, told AFP he had been killed by two men in black on a motorbike.

“At around midday, we heard gunfire and my father crying with pain. We rushed out — my brother, mother and I — to find his body riddled with bullets at the wheel of his car parked in front of the house,” she said.

Beji Caid Essebsi, head of the Nidaa Tounes party, had said Ennahda was to blame for Brahmi’s assassination because it had failed to identify Belaid’s killers.

“There has not been any serious judicial action,” he said.

Ennahda chief Rached Ghannouchi, in a statement to AFP on Thursday, said Brahmi’s killing was a “catastrophe” for Tunisia and said those responsible wanted to drag the country into civil war.