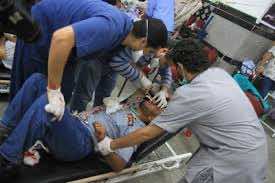 Thirty-seven bodies were seen laid out at a field hospital in Cairo after clashes Saturday between police and Mohamed Morsi loyalists, as a medic said other hospitals received 29 corpses. All of the dead in the Islamist-run field hospital were killed by live rounds, medics told an AFP correspondent at the makeshift hospital near the Egyptian capital’s Rabaa al-Adawiya mosque.

Supporters of Morsi have been camped outside the mosque in the Cairo neighbourhood of Nasr City since the military ousted the Islamist president on July 3.

Essam Sultan, the head of the health ministry’s emergency services, told AFP other Cairo hospitals had received 29 bodies of people killed in the clashes.

Sultan said his figure included only bodies that had reached morgues, excluding the 37 corpses in the Rabaa field hospital.

Doctors at the field hospital said that, including bodies taken elsewhere, at least 75 supporters of the deposed president were killed in the clashes with police and another 1,000 wounded on the road to Cairo’s international airport.

The AFP correspondent at the site said at least four of those killed had gunshot wounds to their heads.

The bodies, which were spread out on the bloody floor of a section of a mosque, were covered with white sheets, on which their names were written.

Morsi’s Muslim Brotherhood said police had fired live rounds when running battles broke out at dawn on the road through Nasr City, where the mosque is located, to the international airport.

The official MENA news agency cited a senior security official as saying that only tear gas was used to disperse the demonstrators.

Eight policemen suffered injuries caused by stones that were thrown at them and buckshot, the official said.