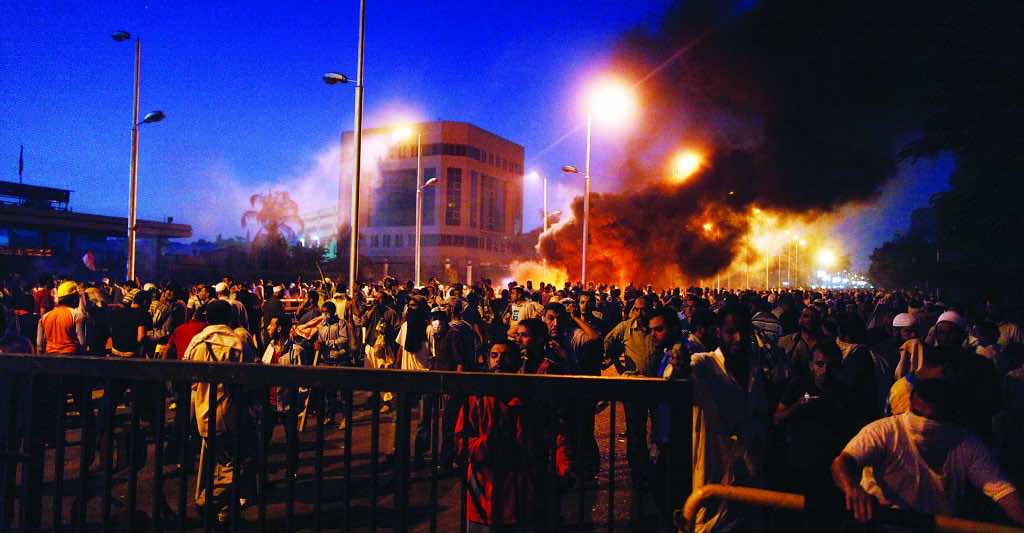 The 37 men had converged on the Egyptian capital from across the nation to show their support for deposed Islamist president Mohamed Morsi.

But on Saturday, they lay on a mosque’s bloodied marble floor, their names and cities of origin scrawled in black marker pen on white body bags.

Mohammed al-Bahi, who died with a faint smile on his face, had a bullet in his chest, medics said. His body was added to the row of corpses soon after the deadly confrontation with police that erupted in the morning.

The 19-year-old business studies student had been camped out at the Cairo sit-in to support Morsi since June 30, just days before the president’s overthrow in a military coup.

“How did he die? Look at the smile on his face,” said his brother, Abdel Rahman.

“He had a cause he was defending. He was not a violent person,” whispered Abdel Rahman, clearly still in shock.

Witnesses say police and “thugs” fired live rounds and birdshot at the pro-Morsi protesters who marched out from their sit-in around the Rabaa al-Adawiya mosque.

The police deny using lethal force, but at the makeshift morgue in the mosque, one corpse after another bore gunshot wounds.

“They were all shot with live rounds,” said a doctor at the field hospital, Amal Ahmed Ibrahim.

As ambulances arrived outside the mosque to remove the corpses, angry and grieving protesters assembled to form a corridor to allow the medics take out the dead.

Some of the onlookers wept as women ululated defiantly.

One woman rushed forward to stop the medics carrying her dead husband on a stretcher, so she could peel back his shroud and kiss his forehead.

“In God’s way we pass, we want to raise the banner. Not for this world have we worked: we will sacrifice for our religion,” the crowd chanted.

Outside the mosque the pro-Morsi protest camp seethed with anger.  Edgy young men, helmeted and wielding clubs, guarded a gauntlet of brick fortifications on the road leading to the scene of the morning’s carnage.

They greeted journalists with victory signs and chants of “Sisi is a killer”, referring to army chief General Abdel Fattah al-Sisi.

On Friday, hundreds of thousands of Egyptians had heeded a call by Sisi for a rally to grant him a mandate to crackdown on “violence and terrorism”.

The general, who led the popularly backed coup against Morsi on July 3, faces a semi-insurgency in the Sinai Peninsula, where militants attack security forces daily.

Privately, military officials have said they consider the sit-in at Rabaa al-Adawiya to be a breeding ground for “terrorism”.

The military and police will eventually move in to break up the sit-in, interim interior minister Mohamed Ibrahim said in a news conference on Saturday, after the deadly clashes.

The Rabaa Al-Adawiya protesters expect that confrontation to be bloody.  “He died today,” said Abdel Rahman Bahi of his brother Mohammed. “And now I’m waiting for my turn. God is sufficient for me, and He is the most excellent custodian.”