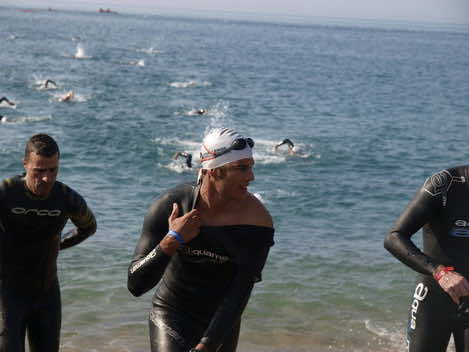 The Moroccan triathlon and marathon athlete, Hassan Baraka on Thursday succeeded in swimming across the strait of Gibraltar.

Born in Tetouan in 1987, Hassan Baraka, is the youngest Moroccan swimmer who took this challenge to fight the Mediterranean waves and successfully achieve his goal to reach the other shore. Through his challenge, and by choosing Spain as his starting point, Mr. Baraka tried to highlight the reverse influx of migrants crossing to Morocco and the change that this new phenomenon can create on both immigrants and the host country.

“I want to make my crossing in the direction from Spain to Morocco in order to highlight the reversal of current migration flows to demonstrate the potential of the Kingdom and especially his sense of home and the hospitality,” he was quoted as saying by Jimdo.com.

The challenge to swim from Tarifa Spain to Punta Cires, morocco, (16.5 to 22 kilometres) took 4hrs and 1 minute.

“That’s it! It took me 4:01 minutes to swim from Tarifa to Punta Cires in Morocco,” said Mr Baraka.

“I warmly thank my sponsors Ain Atlas Cement Morocco and Le Soir Echos, without whom this adventure would not have happened! Their support and involvement allowed me to be calm during my preparation and in the implementation of this challenge,” he added.