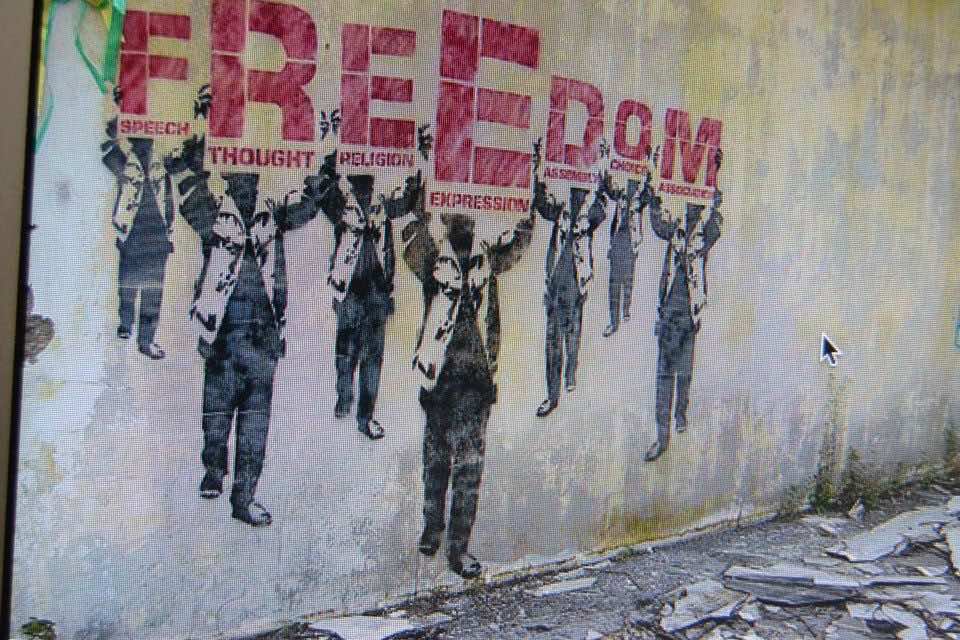 Something was cropping up in my mind which made me unable to do away with writing. Something that brought me face to face with my fate. One that kept nagging and disconscerting me a long time ago. It is this: freedom. It is one of the most abstract ideas that haunted people whereever they are, whenever they are and whatever they are. Freedom, the ability to ask for something that belongs to you but taken away.

It is the moment when you feel that life is that which you are not living. The moment when you live with the feeling that you don’t have any reason for not being what you are not. To spend your days looking at the horizon yearning for flowers to grow up without any mower, red roses to sprout without being yellowed, birds to fly in God’s lovely air high up and up without being hunted down, and nightingales to sing and breathe the wet morning without wailing for the woods that are burning. To behold the beauty of nature smelling the green grass and rejoicing the sight of children playing around the game of Hide and Seek. To see the villager tilling his land, planting the corn and running behind his sheep throwing up stones over the cows that want to cross the bean.

But then, again, to weep over the poor man who died just because he asked for the dinner of his kids, to sigh and smile when you see your mother takes off her blanket and adds it to yours in times of frost and cold in winter nights and to think about the rich man who would frown at the beggar asking him not to show his face again, this is not it.

The flowers of the cherry tree,

How they wave about!

It’s not that I do not think of you,

But your home is so far away.

He did not really think of her. If he did, there is no such thing as being far away. If he did, then why not being told to shut up and hasten  to get his poem effaced and thrown away into fire in order to read this poem:

In other terms, to wonder and ponder about Reason that people claim to have been bound up with. One should hope that the following questions will be asked out of this so called Reason; Is it really possible that freedom, once gone, will never come back to us? Is it possible, I hope it is not, that Rousseau was right when he addressed us saying:” Hey you, free people, retain this maxim and learn it by heart: It may happen that man will seize freedom, but once he lost it, he would never grant it again.”? Je peux pas m’empecher de me sentir tout délabré, écrasé, anéanti, n’ayant plus conscience de rien que d’une extrème fatigue le moment ou’ j’entends parler de cette invention Rousseauènne. Sommes-nous tous des maitres pour écouter cette citation magique: “Peuple libres, souvenez-vous de cette maxime: “On peut acquérir la liberté, mais on ne la recouvre jamais.” ?” Une maxime paradoxale sur laquelle on deverait consulter nos coeurs et nos esprits dans une interrogation bien ordonnée.

To start out with, being but narrow minded people, albeit the pretence we are not, we do not really seem to have the capacity for defining things. It would be all the more ridiculous to try to close things by wanting to assign specific words or expressions for them. Many and many are the ways, we know, in which we persist in scoping and presenting things as they are perceived by our senses rather than our minds. Our minds are filled with our senses and the obverse is also true. Nobody has ever said anything that proved to be constantly agreed upon with no need to be doubted or questioned. It is very hard to make it otherwise. This is settled; there is no such thing as something to be settled. It is of no use to keep on maintaining that we are only dealing with names. Names are themselves named as names.

Therefore, the true identity of things or their presence in our minds is something that has to be constructed and carried out in a reluctant artificial way. Artificiality is all that we can offord to do. Accordingly, the first duty in life is to try to be as artificial as possible so as to be fully accepted and acknowledged in society. Of course, it is extremely important to keep in mind that the only thing worth living for is no more than to keep one self pure. But it is extremely important to retain in mind as well that this can only take place and come about when there is no place for others to impose themselves in one way or another. Solitude is a very case in point. It provides us with a space where one can actually start to forget. To forget society is necessary as it is vital. To come closer to one self and discover its potentialities that are most of the time hidden and repressed. To look for a way out and then in to deploy them and make sure they are working effectively without any codes. This is basically the first step towards freedom. Frederich Holderlin, inside his twenty years of madness, could not but react in this way: “Now I only understand man when I am far away from him and living in solitude.”

Illusion, to my own thinking, is always present as something that is capable of deviating people from performing certain things according to certain rules (religious as they are or societal). This can be avowable but to some extent. The fact will not possibly be of great importance in so far as truth comes to be concerned. Indeed, truth itself is capable of generating the same sort of things. It can deflect certain people and prompt them to do certain things with reference to certain dominions. The question, thus, is the following: What makes us concede that something is true while something else is illusive? Reality and imagination for instance; does the former stand for truth while the latter for illusion? What if both of them are two inseparable parts of the same thing which is illusion? Are we able to live in reality without imagination?

One needs to talk about freedom. The point I wish to make clear is that freedom is not an ideal we are waiting to be imbued with. It is our very reason d’etre without which we are no longer in a position to make any choice regarding our lives and the way we expectingly want them to be lived. Freedom is a human condition and not an idea waiting for its chance to be used.