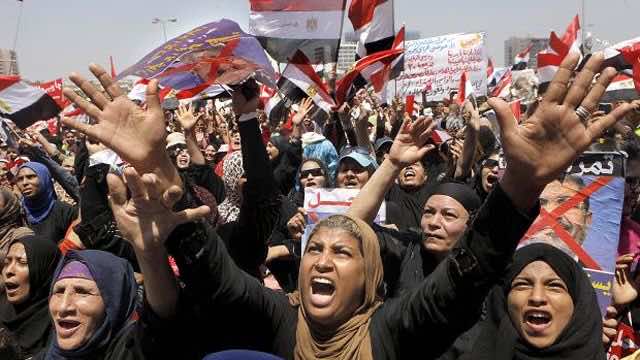 At least two people were killed in Egypt early on Sunday in clashes between supporters and opponents of ousted Islamist president Mohamed Morsi, a security source told AFP.

The deaths came in two separate incidents, one in the Suez Canal city of Port Said, and the other in the town of Kafr el-Zayat in northern Egypt.

In Port Said, “Mohamed Atteya, 18, was killed by a gunshot wound” in violence after the burial of a Morsi supporter killed in clashes in Cairo on Saturday.

The source said 28 others were injured, including two in critical condition.

“Mourners at the funeral of a young supporter of Morsi… opened fire on the Saint George church during the funeral and burned a police car in front of it,” Port Said resident Al-Tabei Faruq told AFP.

“Morsi’s supporters smashed the windows of shops that were displaying pictures of General Sisi,” he added of Abdel Fattah al-Sisi, head of the army that ousted Morsi on July 3.

But Urfa Abu Salmiya, a spokesman for the Brotherhood’s Freedom and Justice Party, denied that Morsi supporters started the clashes.

“Some youths attacked mourners at the funeral,” he said.  Hundreds of Morsi supporters have been holding a sit-in at Port Said’s Al-Tawhid mosque since his removal following mass protests against him.

In Kafr el-Zayat, meanwhile, the source said similar clashes had broken out during the funeral of another Morsi supporter killed in Cairo on Saturday.

The source said 30-year-old Mohamed Gad “was shot in the chest,” in violence after mourners began chanting anti-Sisi slogans.

On Saturday, at least 72 people were killed in violence at a pro-Morsi sit-in in Cairo.