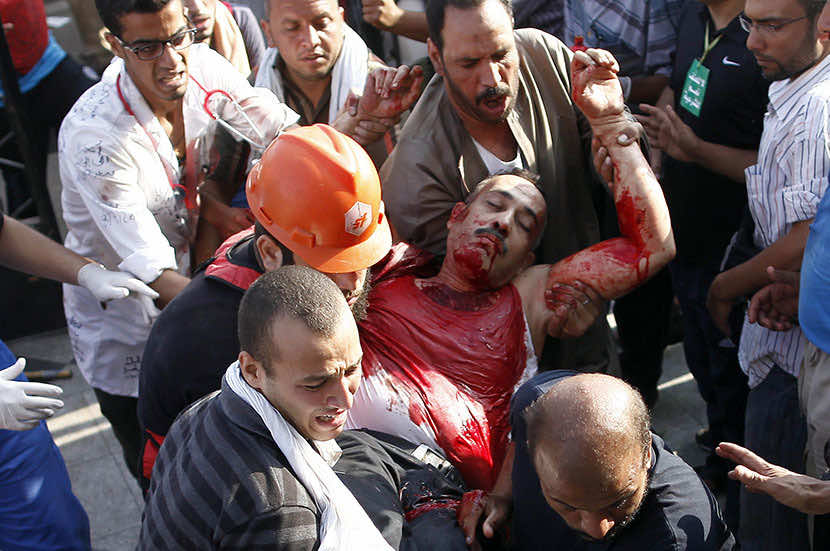 Egypt’s political crisis deepened on Sunday, with the interim government and supporters of deposed president Mohamed Morsi digging in a day after bloody clashes killed 72 people.

Violence was reported in several towns early on Sunday, with two dead in separate incidents.

Saturday’s bloodshed drew international and domestic condemnation, including from Washington, a key backer of  Egypt’s army.

Egypt’s Interior Minister Mohamed Ibrahim, who has warned  that pro-Morsi demonstrations would be dispersed “soon,” again sounded a firm line on Sunday.

“We will not allow any mercenary or person bearing a grudge to try to disrupt the atmosphere of unity, and we will confront them with the greatest of force and firmness,” he said at a police graduation ceremony.

And at the scene of Saturday’s violence, where the health ministry said 72 people were killed, Morsi loyalists remained defiant, with several thousand camped out by the Rabaa al-Adawiya mosque.

“There are feelings of agony and anger, but also a very strong feeling of determination,” Muslim Brotherhood spokesman Gehad el-Haddad told AFP.

“For us, if we die, we meet our creator and we did so for a just cause… Either we die or we succeed.”

Sociology professor Khaled Khalil noted that former president Hosni Mubarak who was ousted by the January 2011 uprising “fell in a peaceful way.”

“God willing, Sisi will fall in the same peaceful way,” he added of army chief General Abdel Fattah al-Sisi, who led the coup that deposed Morsi.

The violence early on Saturday was the bloodiest incident since Morsi’s July 3 ouster following huge demonstrations against his rule.

The deaths came after rival protests both for and against Morsi on Friday.  The health ministry said nine people were also killed Friday in second city Alexandria.

Both clashes came at the funerals of Morsi supporters killed in Cairo.  In Menufiya, in the central Delta region, Morsi opponents set fire to the Brotherhood headquarters, causing no injuries, MENA said.

Ibrahim warned Saturday that pro-Morsi demonstrations would be dispersed “in a legal fashion” and “as soon as possible,” urging protesters to “come to their senses” and go home.

US Secretary of State John Kerry, whose country contributes hundreds of millions of dollars in military and economic aid to Egypt, expressed Washington’s “deep concern”.

In a statement, Kerry called on the authorities to “respect the right of peaceful assembly and freedom of expression” and urged both sides to help Egypt “back from the brink.”

US Democratic Senator Dianne Feinstein said her government should “relook at granting aid” to Egypt.

British Foreign Secretary William Hague urged the authorities to “cease the use of violence against protesters, including live fire, and to hold to account those responsible”.

The violence also prompted domestic criticism, with Vice President Mohamed ElBaradei, a former opposition activist, denouncing “excessive use of force” by the authorities.

The National Salvation Front coalition of leftist and liberal groups said the Brotherhood bore some of the blame for its “provocative approach”.

The deaths followed a call from Sisi for a mass show of support for a crackdown on “terrorism”.

Hundreds of thousands of Egyptians obliged, demonstrating their continued support for Morsi’s ouster.

Morsi, elected after the 2011 uprising that toppled Mubarak, is being held in custody accused of “premeditated murder” over his escape from prison that year.

The violence, and the defiant response to it from both sides, showed the deep polarisation in Egypt.

Egypt “is structured with two political forces, the Muslim Brotherhood and the army,” said Jean-Yves Moisseron, a Middle East expert at France’s Institute for Research and Development.

Egypt’s liberals “did not seize the historic opportunity they had in 2011 to structure themselves in an autonomous way, (and as a result) the historic conditions for a democratic transition in Egypt are far from materialising.”