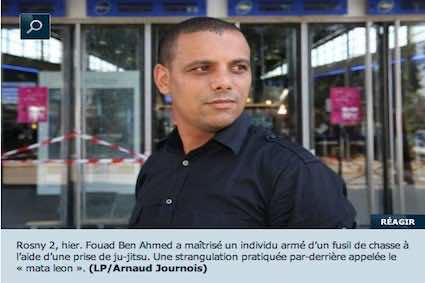 The heroic intervention of Fouad Ben Ahmed, 37, Director Youth Service in Bondy, has helped to avoid potential carnage Wednesday evening in the movie theatre of the Seine-Saint-Denis.

Fouad Ben Ahmed was booking his tickets for “Man of Steel” from the offices of the UGC Rosny 2 when a man armed with a shotgun broke into the hall of the cinema.

The man first “moved to a cashier before heading towards the interior of cinema,” said Fouad Ben Ahmed who, despite the risk, decided to quietly follow him and take control of him with a Brazilian Ju-jitsu know as ‘mata leon.’

The moment Fouad approached the man, he felt “afraid for [his] children,” but thanks to his courage and dexterity he managed to take control of the situation and save the place from a possible bloodshed.

Commentators on the incident extolled Fouad Ben Ahmed for his act and denounced media silence when such acts of bravery are done by people of immigrant origins.

“It is true that once a heroic act is committed by a man of immigrant backgrounds no mass media talk about; strange, isn’t it? It makes you wonder whether the system’s famous phrase ‘living together’ really works,” commented an anonymous.

“Hats off for this gentleman who spared the place a big tragedy like what is unfortunately often the case in the United States,” commented another one.