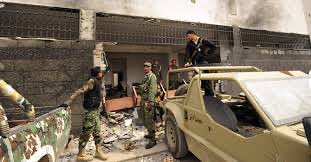 Two powerful explosions went off near the courthouse in Libya’s second city of Benghazi late on Sunday, wounding 10 people and causing damage, a security source and witnesses said.

The blasts came a day after 1,000 inmates escaped during a prison riot in the eastern city, birthplace of the 2011 armed uprising that ousted and killed dictator Moamer Kadhafi.

Mohamed Hijazi, spokesman for the security services in Benghazi, said the blasts were caused by two suitcase bombs.

Pictures on the Internet showed cars ablaze and scattered rubble, as well as a gaping hole in the wall of a building.

Amid a spate of incidents in the restive city, more than 1,000 inmates escaped during Saturday’s riot in Benghazi’s Al-Kuifiya prison, a security official said.

And hundreds of protesters took to the streets of Benghazi on Friday night to condemn the assassination in the city earlier that day of Abdessalem al-Mesmari, an anti-Islamist lawyer who campaigned for a civil state.