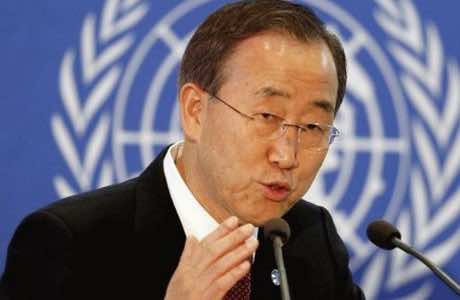 UN leader Ban Ki-moon warned Egypt’s interim leadership on Sunday that every death in demonstrations is making it harder to drag the country out of its crisis, a spokeswoman said.

Ban spoke with Vice President Mohamed ElBaradei and the foreign ministers of Turkey and Qatar and the head of the Arab League to highlight his “profound concern” over the worsening turmoil in Egypt, said a UN spokeswoman Morana Song.

In talks with ElBaradei, Ban renewed a call for Egypt’s military to release ousted president Mohamed Morsi or give him a “transparent” investigation and trial, said the spokeswoman.

Ban “expressed his profound concern about the direction in which the transition in Egypt is moving” and condemned the heightened violence. He raised his fears one day after 72 people were killed in a Cairo demonstration.

“He called on the interim authorities to assume full responsibility for the peaceful management of the demonstrations and to ensure the protection of all Egyptians, regardless of party affiliation,” said Song.

Ban said there had to be a “genuinely inclusive, peaceful political process” and “underlined that with every new death this long-term reconciliation becomes harder.”

In calls with Turkish Foreign Minister Ahmet Davutoglu, Sheikh Hamad bin Jassem al-Thani of Qatar and Arab League Secretary General Nabil al-Arabi, Ban “shared his deep alarm about the situation in Egypt, and the unacceptable loss of life over the past two days.”

Ban told the ministers all Egyptian leaders had “to urge their supporters to show restraint, curb their anger, and try to engage in a meaningful.