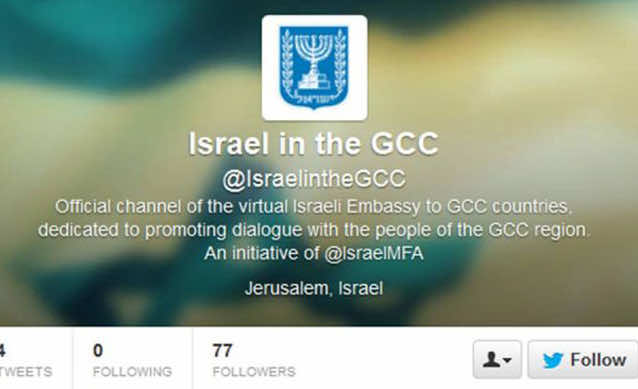 In an innovative attempt to closely connect with the Middle East, the Foreign Ministry of Israel has developed a ‘virtual embassy’ in the form of a Twitter account, reported Israeli media.

For the purpose of strengthening its ties with Gulf countries, Israel aims at seeking and encouraging dialogue, tolerance, peace, and genuine understanding.

“We are exploring government, people and societies … trying to skip over the borders and using the new media to create virtual embassies,” Rafael Barak said in an interview.

The Twitter account, which is called “Israel in the Gulf Cooperation Council” intends to go beyond borders and ameliorate its poor diplomatic relations between Israel and the Middle East. Given Israeli’s fear to lose its allies’ trust, it is seeking to seize any opportunity at hand to re-build peace, be it virtual or real.

According to Haaretz, Youram Murad, head of Digital Diplomacy Division at the Ministry of Foreign Affairs of Israel, is administering the official page of the virtual Israeli embassy to GCC countries.

Israel’s decision to open this virtual embassy is also a clear sign that the country is seeking to equally strengthen Israeli-Palestinian ties.

After Israel’s failure to convince the Muslim world that it is a country of dialogue and peace, it is now attempting to approach Arab countries in a more subtle manner.

In 2000, Israel-Palestine tensions forced Israel to close its offices in Oman and Qatar. For Israeli high-ranking officials, resorting to virtual diplomatic relations can be the best solution at hand.

According to Haaretz English website, Saudi Arabia, the United Arab Emirates, Oman, and Kuwait are, strategically speaking, among the countries Israel is seeking to befriend for the aim of silencing Arab’s anger over Palestine-Israel tense relations.

In the absence of official diplomatic relationships with the GCC, the brainchild of Israeli diplomacy, Gary Koren, noted that Israel is also aiming to “reach out and open lines of dialogue”.