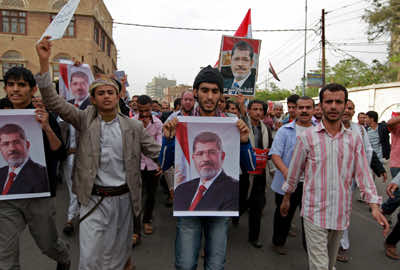 Supporters of Egypt’s ousted president called for new protests on Monday, threatening to deepen the country’s crisis as the EU foreign policy chief met both the government and the opposition.

The Anti-Coup Alliance of Islamist groups organising protests against the ouster of president Mohamed Morsi urged demonstrators to march on security buildings on Monday night and called a million-man march for Tuesday.

Their statement came after the National Defence Council warned on Sunday that it would take “decisive and firm action” against demonstrators if they went beyond their right to peaceful protest.

Tensions were running high after the deaths of 72 people at a pro-Morsi rally in Cairo on Saturday.

“We… call for a million person march under the banner of ‘Martyrs of the Coup’ on Tuesday,” the Anti-Coup Alliance said in a statement.

The group urged Egyptians “to go out into the streets and squares, to regain their freedom and dignity — that are being usurped by the bloody coup — and for the rights of the martyrs assassinated by its bullets.”

It also called for protesters to march on security buildings across Egypt on Monday night “to condemn the criminal acts and the firing of live ammunition by the interior ministry at peaceful demonstrators.”

The calls raised the possibility of fresh confrontations after the National Defence Council warned protesters “not to exceed their rights to peaceful, responsible expression of their opinions”.

The council, which includes the military-installed interim president and the army chief, said demonstrators would face “decisive and firm decisions and actions in response to any violations.”

The military issued its own warning to Cairo protesters in flyers dropped from helicopters in the early hours of Monday.

“We call on you not to approach military facilities or units, help us to protect your safety,” it said, addressing protesters as “honourable sons of the nation.”

Shortly after her arrival on Sunday she met vice president for international affairs, Mohamed ElBaradei, his office said.

“ElBaradei stressed that Egyptian authorities are doing everything possible to achieve a peaceful way out of the crisis,” a statement said.

Ashton will meet ElBaradei again after talks with other officials, including interim president Adly Mansour and representatives of Morsi’s Muslim Brotherhood, his office said.

On Monday morning, she met foreign minister Nabil Fahmy, who emphasised “the importance of reconciliation and the participation of all political powers” in a road map announced after Morsi’s ouster, his spokesman said.

In a statement earlier, Ashton said she would be calling for “a fully inclusive transition… including the Muslim Brotherhood”.

The Brotherhood’s political arm, the Freedom and Justice Party, confirmed it would meet Ashton on Monday on the basis of “constitutional legitimacy and in pursuit of an end to the military coup.”

The group has insisted that it will not accept any solution to the crisis that does not involve Morsi’s return to office.

The bloodshed in the Arab world’s most populous nation has sparked mounting international concern, with UN leader Ban Ki-moon warning Egypt’s interim leadership on Sunday that every death made it harder to end the crisis.

Ban “expressed his profound concern about the direction in which the transition in Egypt is moving” and condemned the heightened violence, UN spokeswoman Morana Song said.

He called on the authorities to protect “all Egyptians, regardless of party affiliation”, Song added.

In its first comments on the bloodshed, Egypt’s interim presidency said on Sunday that it was “saddened,” but dubbed the protest area where the deaths occurred a “terror-originating spot”.

“We cannot decouple this (incident) from the context of terrorism,” presidential adviser Moustafa Hegazy told reporters.

A security source and the Anti-Coup Alliance said two leaders of the moderate Islamist Wasat party — president Abul Ala Mady and vice president Essam Sultan — were arrested early on Sunday.

The party is taking part in the protests calling for the reinstatement of Morsi, who has been in custody since just hours after his July 3 ouster.

Last week, he was formally charged with offences related to his escape from prison during the 2011 uprising that overthrew president Hosni Mubarak.

In the Sinai Peninsula, where security has deteriorated rapidly since the 2011 uprising, an attack on a military post in Rafah near the border with Gaza killed one Egyptian soldier and wounded eight overnight.