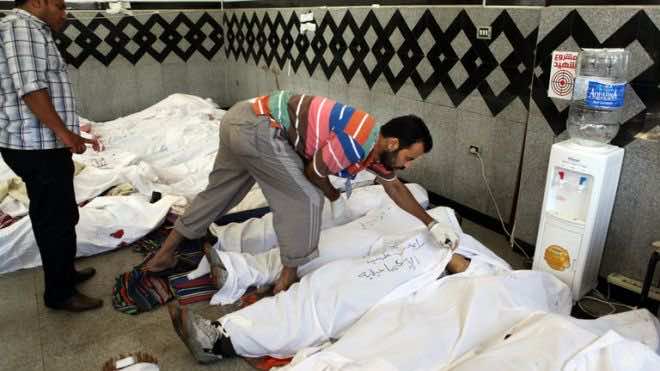 A group of Egyptian NGOs called on Monday for the interior minister to be dismissed over the deaths of at least 72 people at a Cairo protest.

The groups also urged the Muslim Brotherhood, which has led protests calling for the reinstatement of ousted president Mohamed Morsi, to reject violence.

The deaths came at a Saturday protest by backers of Morsi, who hails from the Muslim Brotherhood, with protesters saying forces used live fire on unarmed demonstrators. Interior minister Mohamed Ibrahim has denied blame for the violence, but NGOs accused his forces of carrying out a “massacre.”

“The interior minister should be dismissed and held accountable for his actions,” the groups wrote. “The minister’s responsibility is not mitigated by the fact that some demonstrators first shot at the police or local residents or that they cut vital roads or built cement barriers to obstruct traffic,” they added.

“The Egyptian security forces’ recurrent use of excessive, lethal violence in the face of political protest will only exacerbate the political ills that led Egyptian society to rebel.”

But the nine groups, which include the prominent Egyptian Initiative for Personal Rights and the Arabic Network for Human Rights Information, also urged the Brotherhood to renounce violence.

“Members and leaders of the Muslim Brotherhood who reject political violence and incitement to religious and sectarian hatred must take action to persuade their colleagues and leaders to renounce these methods,” the groups said.

They must “turn over those who engage in violence or carry weapons during political activities to the proper law enforcement bodies.” The statement comes amid deep polarisation in Egypt, particularly after the Saturday deaths — the bloodiest incident since the July 3 ouster of Morsi. The Islamist president was deposed by the military after massive protests against his rule.