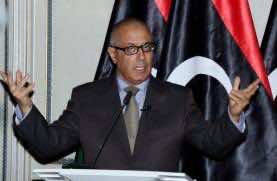 Libya’s premier said Monday he would restore a feared Kadhafi-era security agency and reshuffle the cabinet to help resolve a political crisis and end a wave of violence.

Ali Zeidan said he would reactivate the Internal Security Agency which helped keep the former dictator in power for decades to try to stem a spate of bombings and assassinations, particularly in the east of the country.

“I understand the population’s opposition to this agency that was used by the former regime to repress the people,” he said.

“But without an efficient intelligence body, we cannot stop the attacks,” he said the day after two explosions outside the courthouse in second city Benghazi wounded 43 people, according to the latest health ministry toll.

Zeidan told a news conference in Tripoli that a new defence minister had been chosen and that by Wednesday a new list of ministers would be presented to the country’s highest political authority, the General National Congress.

Libya has not had a defence minister since the removal of Mohammed al-Barghathi from the post in late June.

Zeidan did not name any of the candidates or other portfolios that will be affected by the reshuffle.

But he did say that “a personality” had been chosen for the defence post.

Meanwhile, the GNC announced on Facebook that it had appointed a new chief of staff on Monday.

Abdessalem Jadallah al-Salihin, who had been an officer in Kadhafi’s special forces but joined the uprising against him in 2011, was named to the post.

In his speech, Zeidan also said specialised teams from Britain and Interpol were expected in Libya soon to help investigate the violence in Benghazi.

On Monday, a car bomb exploded in central Benghazi, a security spokesman told AFP, adding that it had been an attempt to kill a senior naval officer.

“The explosion was caused by a device attached to the car,” Mohamed Hijazi said after reports of a white pickup truck exploding in the city centre and bursting into flames.

“It was an attempted assassination,” Hijazi said, adding that the officer was wounded in the blast.

Clashes between the Libyan army and an armed group near the central town of Sirte killed two people and wounded four others, the news agency LANA reported, without giving further details.

“Those responsible for violence against the Libyan people, be it shootings or bombings, must be brought to justice to answer for their crimes,” a statement from her office said.

Zeidan said on Friday a ministerial reshuffle would cut the number of cabinet members to create “greater efficiency”.

He accused the General National Congress of shackling his efforts and stressed: “I’m an independent. I am not supported by any one party.”

On Saturday and Sunday the offices of political parties in the capital and in Benghazi were vandalised.

Parties targeted included the Muslim Brotherhood’s political wing the Party of Justice and Construction (PJC) and its liberal rival the Alliance of National Forces (NFA).

Amid a spate of incidents in Benghazi, nearly 1,300 inmates escaped during a riot on Saturday in the city’s Al-Kuifiya prison, a security official said. On Friday night, hundreds of protesters took to the streets of Benghazi to condemn the assassination earlier that day of Abdessalem al-Mesmari, an anti-Islamist lawyer who campaigned for a civil state.

Many Libyans blame political rivalries for the problems plaguing a country awash with militias and weaponry left over from the 2011 revolution that toppled Moamer Kadhafi.

“It was a mistake to allow political parties to operate before a constitution was adopted and a law regulating parties was drawn up,” Zeidan admitted on Monday.

“The party with the greatest interest in seeing the country sink into violence and instability is undoubtedly the former regime,” commentator Mohamed Belkheir said.

“Supporters of the former regime have money and are well embedded in the cogs of the state machinery,” he said.

Ashton, who was in Egypt on Monday for talks as Libya’s eastern neighbour was rocked by violence after a July 3 coup, urged Libyans to rally behind Zeidan.

She called on Libyans “led by the democratically elected government of Mr Zeidan, to ensure the security and stability of the country in the face of those groups who try to undermine the Libyan transition,” her statement said.

“She also encourages the Libyan authorities to proceed as quickly as possible with the process of drafting and adopting a new constitution.”