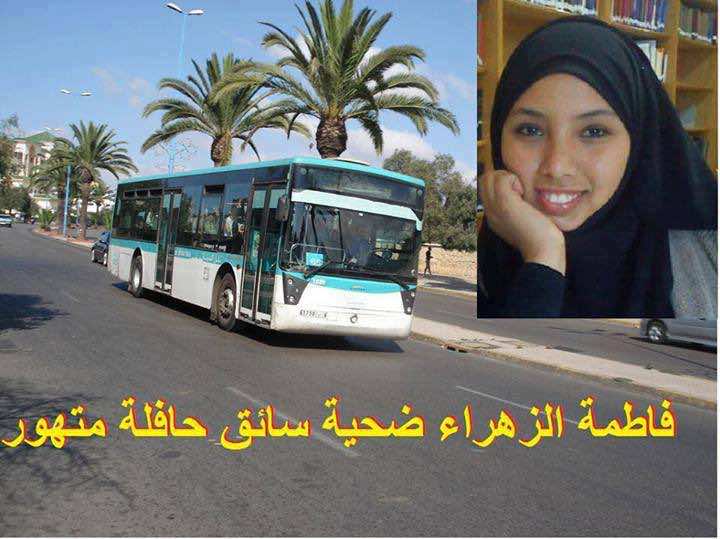 No wonder that Morocco ranks first in the Arab world and sixth worldwide in terms of the number of traffic accidents. Thousands of people die annually in fatal road accidents, because of many reasons chief of which the human factor.

Fatima Zahra Najbit is another victim of reckless minds that circulate in our streets and roads with their vehicles and carry death along wherever they move.

On Friday, July 17, Fatima Zahra finished her exams at the faculty of law Hassan II in Casablanca at 5 p.m. and headed to the bus station with many expectations, dreams, hopes and fears of a young student full of life and ambition. At the bus station Fatima Zahra didn’t know that the moments she spent waiting on the bench of the station were the last moments in her life. When the bus/death came, she stepped into it with one foot, but the reckless driver didn’t wait until she got in and rolled along. Fatima Zahara lost balance and crushed her head against the sidewalk. The internal bleeding in her brain finally caused her death before she could break her fast on the same day.

According to her classmates and friends, Fatima Zahra was known for her morals, respect and self-discipline; attributes that made her a lovable person among her friends.

The tragic death of Fatima Zahra caused anger and resentment at urban transportation companies in Casablanca and Morocco. An avalanche of comments Facebook denounced the state of chaos and disorder in public urban transportation and called on the authorities to organize the sector and enforce the law to spare Morocco more deaths and casualties.