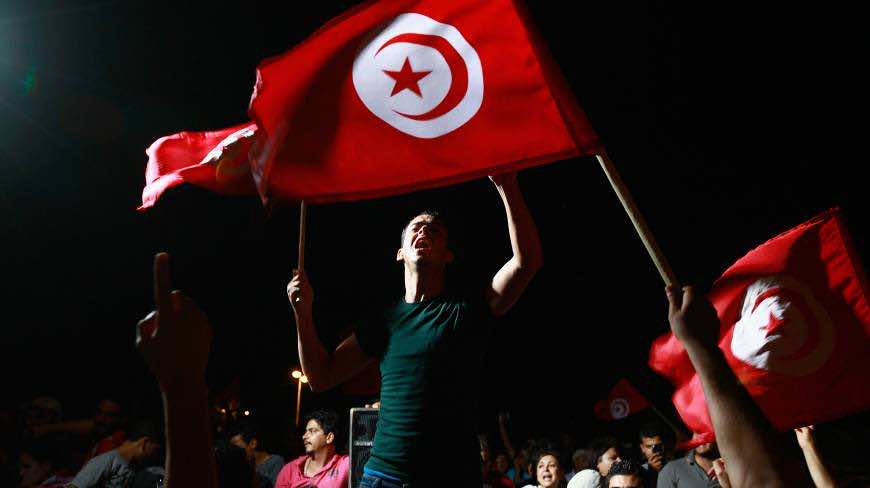 Tunisia on Tuesday mourned eight soldiers slain by militants as appeals from the Islamist-led government for unity and the calling of a December general election failed to quell violent protests.

As pressure mounted for the government to resign, Interior Minister Lotfi Ben Jeddou said he had considered stepping down but would stay put until the formation of a unity government capable of tackling political tensions and unrest.

The soldiers were found on Monday, their throats slit after they were ambushed by an armed group in Mount Chaambi near the Algerian border where the army has been tracking Al-Qaeda militants.

The brutal killings triggered protests in the nearby eastern city of Kasserine, where demonstrators ransacked the local office of the ruling moderate Islamist Ennahda party overnight, an AFP correspondent reported.

That incident came despite calls by President Moncef Marzouki for national unity and after Islamist Prime Minister Ali Larayedh announced a general election for December.

The election is seen as a concession aimed at appeasing a growing mood of rebellion in Tunisia, where emotions have run high since Thursday’s assassination of a prominent opposition MP.

Many Tunisians want the government to go, believing it is responsible for the murder of Mohamed Brahmi — the second opposition figure killed since February.

The North African nation, cradle of a wave of popular uprisings that swept the region, has been rocked by almost a week of violent anti-government protests.

The interior minister told a Tunisian radio station he wanted to see a unity government as soon as possible.

“I considered handing in my resignation along with other security officials but in light of developments I decided to stay until the formation of a government that includes all the parties, and which will overcome their selfishness in order to meet the challenges and combat terrorism,” he told Mosaique FM.

“We are not clinging to power, but we have a duty and a responsibility that we will exercise to the end,” he said,  proposing instead a general election for December 17.

On Tuesday, Ennahda and several smaller parties moved to defuse the crisis by proposing that the ruling coalition be enlarged.

“We call for the constitution of a broad national coalition to put into effect the objectives of the revolution” that overthrew veteran strongman Zine El Abidine Ben Ali in 2011, a declaration said.

The signatories affirmed their “attachment to consensus and dialogue” and called for “widening the political base of power”.

However, the powerful UGTT, a key player in the 2011 uprising did not back the call by thousands of protesters who have demonstrated nightly outside the National Constituent Assembly calling for its dissolution.

Just hours after Larayedh spoke on Monday, officials announced the death of the soldiers near the Algerian border.

State television ran pictures of the mutilated corpses of the victims, some of whom had their throats cut and had been stripped of their uniforms and weapons.

In a televised address, Marzouki, the secular president who is allied to Ennahda, called for national unity after the soldiers’ deaths as his office announced three days of national mourning.

“I call on the political class to return to dialogue because the country, society, is under threat.”

On Tuesday Marzouki attended a ceremony for the slain soldiers in Kasserine, where protesters have called for new anti-government protests later in the day.

Since Brahmi’s death, some 60 deputies have boycotted the assembly, which is drawing up the new constitution.

The government and UGTT stressed that deputies must return to work and vote on the much-delayed constitution, one of the thorniest issues in post-revolution Tunisia.

“We think that the National Constituent Assembly will complete the electoral code by October 23 at the latest so elections can be held on December 17,” Larayedh said.

It was on that day in 2010 that fruit vendor Mohamed Bouazizi set himself on fire in the town of Sidi Bouzid, beginning the revolution that ended Ben Ali’s 23-year grip on power.