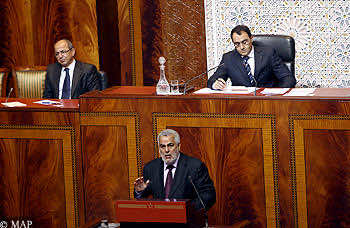 Five parliamentary groups boycotted on Monday the monthly session devoted to the major directions of the government policies in the House of Representatives, according to the Moroccan daily Le Matin.

It is not the first time that the opposition abstains from attending a parliamentary session leaving the head of government with an audience of MPs from the majority only. This boycott comes as a reaction to the uneven allocation of time during the monthly parliamentary session.

The Opposition pinpoints that Mr. Benkirane takes more intervention time and seizes the opportunity to convey political messages. The president of the PJD parliamentary group, Abdellah Bouanou has described the opposition’s boycott as political torpor. ”there are still 10 points of discord regarding the parliament internal law and we are still waiting for the constitutional council verdict, this agreement should be respected,” he said.

The PJD has also condemned the Istiqlal party’s absence especially that the IP member Nourredine Mediane was the one who had presented a question about the situation of Moroccans living abroad, a topical issue often raised during the summer session, which coincides with the arrival of Moroccan expatriates.