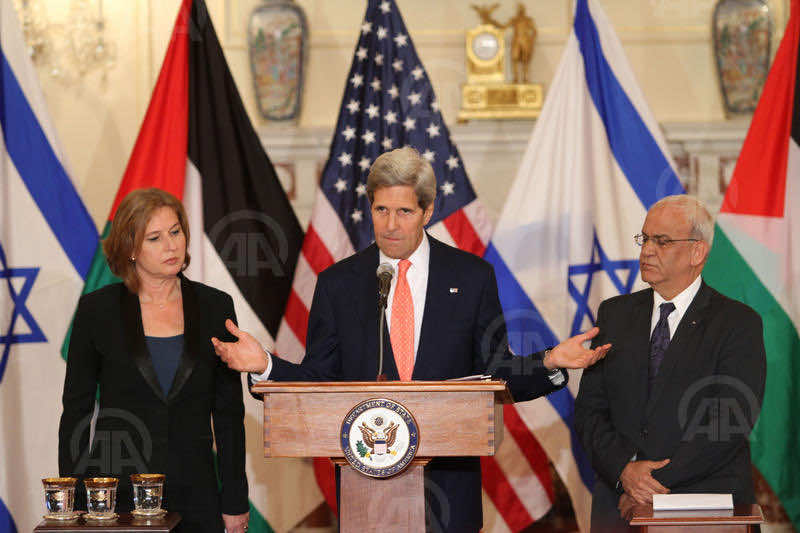 On the second day of the Middle East peace talks resumed in Washington, Israeli and Palestinian negotiators met at the US State Department.

Following the meeting, US Secretary of State Kerry held a press conference with Livni and Erekat.

Stating that it took a lot of work and a long time to reach the new moment of possibility in the pursuit of an end to the Israeli-Palestinian conflict, Kerry thanked Isreali PM Netanyahu and Palestinian President Abbas both for demonstrating courageous leadership and commended them for the tough choices that they made in terms of the politics at home.

“I know the path is difficult. There is no shortage of passionate skeptics. But with capable, respected negotiators, like Minister Tzipi Livni and Dr. Saeb Erekat, standing side by side here today, and last night sharing an Iftar meal together with all of us, with their efforts, their expertise and their commitment, I’m convinced that we can get there,” he said.

He denoted that they had a constructive and positive meeting, underlining that the parties have agreed to remain engaged in sustained, continuous and substantive negotiations on the core issues.

“The parties will meet within the next two weeks in either Israel or the Palestinian territories in order to begin the process of formal negotiation,” noted Kerry.

Kerry stated that the parties also agreed that all of the final status issues, the core issues, all other issues are on the table for negotiation.

He argued that the only way to end Israeli-Palestinian conflict is a practicable two-state solution.

“We all understand the goal that we’re working towards: two states living side by side in peace and security. Our objective will be to achieve a final status agreement over the course of the next nine months,” he stressed.

US top diplomat pointed out that they agreed to keep the content of the negotiations confidential, saying “The only announcement you will hear about meetings is the one that I just made. And I will be the only one, by agreement, authorized to comment publicly on the talks, in consultation, obviously, with the parties. That means that no one should consider any reports, articles or other — or even rumors reliable unless they come directly from me, and I guarantee you they won’t.”

He noted that the United States will work continuously with both parties as a facilitator every step of the way.

Kerry concluded that “We need to actually change the way we think about compromise in order to get to success. Compromise doesn’t only mean giving up something or giving something away. Reasonable, principled compromise in the name of peace means that everybody stands to gain, each side has a stake in the other’s success, and everyone can benefit from the dividends of peace. We simply wouldn’t be standing here if the leaders, President Abbas and Prime Minister Netanyahu, and their designated negotiators and all of us together didn’t believe that we could get there. We can envision a day when Palestinians can finally realize their aspirations for a flourishing state of their own.”

Besides, US President Barack Obama also met the negotiators in the White House.

Palestinian Chief Negotiator Dr. Saeb Erekat expressed his delight that all final status issues are on the table and will be resolved without any exceptions.

“Palestinians have suffered enough, and no one benefits more from the success of this endeavor more than Palestinians. It’s time for the Palestinian people to live in peace, freedom and dignity within their own independent, sovereign state,” he said.

Israeli Justice Minister and Chief Negotiator Tzipi Livni also remarked on the meeting, arguing that “We all know that it’s not going to be easy. It’s going to be hard with ups and downs.”

“I can assure you that in these negotiations it’s not our intention to argue about the past but to create solutions for the future,” she stressed.