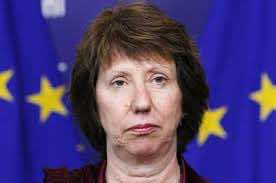 EU foreign policy chief Catherine Ashton left Egypt Tuesday after a mediation trip that included talks with the ousted president, but the country’s crisis appeared no closer to a resolution.

She said Mohamed Morsi, who has not been seen in public since being deposed on July 3, was “well,” but did not say where he was being held.

And neither the interim government nor Morsi’s supporters gave any indication that they had shifted their positions after her visit.

Morsi loyalists continued to rally throughout the day, despite stern warnings from the military and National Defence Council and the deaths of 82 people at a protest on Saturday.

They had announced a million-man march but instead held a series of smaller rallies that passed off peacefully.

“Morsi is well,” Ashton told reporters on Tuesday morning, after two hours of talks with the ousted leader.

“We had a friendly, open and very frank discussion,” she added, declining to characterise Morsi’s comments.

Morsi has not been seen in public since his ouster and is being held in custody on allegations related to his escape from prison during Egypt’s 2011 uprising.

Ashton said meeting Morsi was a condition of her trip to Egypt.

“I said that I would not come unless I could see him and that was freely offered to me.”

But she said her talks with him and a string of government officials and opposition representatives were not intended to push the two sides to the table.

“We want to help facilitate the bringing together of ideas,” she said, adding that she was hoping to find “common ground”.

In Brussels, Ashton’s spokesman Michael Mann said the EU had a key role “because everybody is willing to talk to us”.

She also met representatives of the pro-Morsi coalition, which said that “no initiatives” to resolve the crisis had been discussed, adding that it remained committed to Morsi’s reinstatement.

“We are ready to talk to anybody, but we don’t see anything positive from the other side,” added Amr Darrag, a senior member of the Muslim Brotherhood’s political arm.

ElBaradei, speaking at a news conference with Ashton after a second meeting with her Tuesday, insisted Morsi would play no role in Egypt’s political process going forward.

ElBaradei stressed that ending violence was his “immediate priority”.  “I have always believed that violence is not the way, that we have to try every possible way to remove or to end polarisation,” he said.

Ashton said she would return to Egypt, without giving a date.  Morsi loyalists have rallied daily for his return to office and staged multiple small-scale marches from their key sit-in site by the Rabaa al-Adawiya mosque on Tuesday.

Tensions have been running high since Saturday morning, when 82 people were killed at a pro-Morsi protest, including a police officer.

The incident was the bloodiest since Morsi’s ouster, a period in which more than 250 people have died.

The bloodshed and the persistent deadlock have prompted growing international concern.

French Foreign Minister Laurent Fabius had earlier also called for “dialogue and for the release of president Morsi”.

The violence has also sparked domestic criticism from human rights groups.  Egypt’s interim presidency has said it was “saddened” by the deaths, but called the protest area where they occurred a “terror-originating spot”.

Unrest continued in the Sinai Peninsula meanwhile, where five members of the security forces — two soldiers and three policemen — have been killed in separate shootings in the past 36 hours.