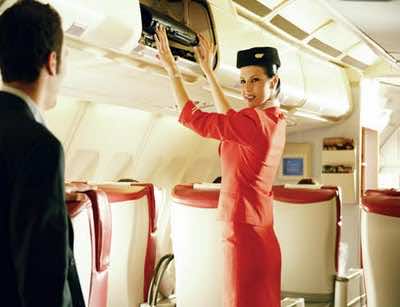 While you may have often heard of passengers getting into trouble for flirting with the hostess, the tables may have turned this time.

Two Saudi male passengers were escorted off a plane, set to travel from Riyadh to Jeddah last Tuesday, after confronting a “flirty” air hostess who reportedly showed little respect for “traditional customs.”

Speaking out this week, Khaled bin Abdulrahman al-Mahyzaa, who is said to be a Muslim cleric, said he was removed from the plane after he confronted the air hostess, of Arab origin, for “flirting” with a foreigner on board.

She addressed a male passenger as “habibi,” a widely known Arabic term of endearment translated as “my love” or “darling,” Mahyzaa told Saudi newspaper “Sabq” earlier this week.

The term “habiby” however can also be used in a different context. Despite its literal definition, Arabs can also use it sarcastically in an argument or to mock someone, even.

The Saudi Airlines plane, meanwhile, was reportedly delayed for more than an hour.

Mahyzaa later said the hostess violated regulations, customs and traditions, was offensive and did not take into consideration the presence of passengers and their families on board.

Mahyzaa and another man on board, a police officer, attempted to tell her that it was inappropriate to speak in such a way but she responded angrily.

Security forces were then brought on board to escort him, his family members, the officer and his accompanying family, all off the plane.

Mahyzaa said the case is now being investigated by the Saudi Bureau of Investigation and Public Prosecution.

He requested that investigators hold the flight attendant accountable for violating traditional customs and insulting both him and the officer.