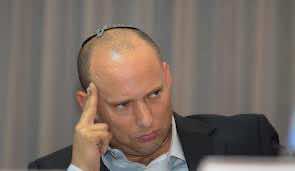 Palestine’s Foreign Ministry said in a written statement that if Israel was suggesting it respected laws, it needed to conduct a transparent investigation into Bennett’s remarks and allowed lawyers to take part in the investigation as observer.

All law societies from Palestine and Israel must take “those confessions”  seriously, said the statement, calling on authorities to prepare a file to try him under international law.

Bennett had said “If you catch terrorists, you have to simply kill them,” while Amidror said it was not legal. Following Amidror’s reply, Bennett said ” I have killed lots of Arabs in my life and there’s no problem with that.”

Bennet claimed a quote attributed to him saying “I have killed many Arabs in my life,” was taken out of context.

Bennett’s spokesperson said when Bennett referred to killing Arabs, it was in the context of operations he participated in while serving in the army.