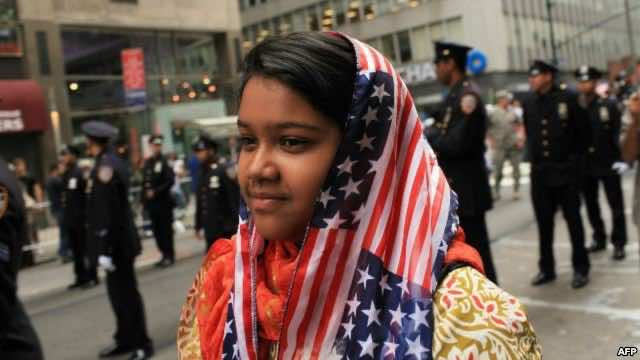 By
youssef sourgo
-
Youssef Sourgo is currently a Master’s student in Linguistic and Literary studies at Ain Chok Faculty of Letters and Humanities.
Jul 31, 2013
Spread the love

Despite all the Islamophobic misjudgments that still roam in the heads of some Americans, Islam still enjoys an important position in the United States. Many Muslim communities all over the U.S. are among the most respected and successful there. They are mainly distinguished by their peaceful, generous and welcoming attitudes towards everyone.

There are currently two Muslim congressional representatives in the American congress. The first is Kate Allison, who was elected in 2006 to be the first Muslim American to join the congress. He is also the first African American to represent Minnesota State in U.S. congress. The second one is Andry Carson, who was elected in 2008 as a representative of Ohio State in an exceptional election, after the death of his grandmother who had held that position before him. Both Muslim congressmen, Allison and Carson, are affiliated with the democratic party.

2.    Most Muslim Americans were born abroad

According to a study conducted by Pew Research Center in 2007, 65 % of grown-up Muslims in the U.S. were born abroad, and 15 % of Muslims are from the second generation; that is, either one or both of their parents were born outside the United States. The study also shows that 81 % of Muslims in America are U.S. citizens.

3.    A quarter of Muslims in America are Arabs

According to a survey by Zogby Intarnational (2004), Arabs constitute 25 % of Muslims in America, whilst Muslims from South Asia (Pakistan, India, and Bangladesh) constitute 30 % of the Muslim population in the States. African-Americans constitute 25 % of the Muslim population. The remaining 20 % of Muslims in the U.S. comprises Muslims from Iran, Afghanistan, Indonesia, Western Africa, Balkan Peninsula, Latin America, as well as white Americans.

According to a research conducted by Ihsan Bagby, a professor of Islamic Studies from Kentucky University’s, the number of mosques in the U.S. reached 2106 in 2011. The number of mosques increased by 74 % since 2000, when there were barely 1209 mosques throughout States. New York is the state with the highest number of mosques (257), followed by California (246), Florida (218), Texas (166), then Illinois and New Jersey (109 mosques each).

It is believed that the first mosque in the U.S. was constructed in 1915 by Albanian immigrants who used to work in a textile factory, in Bedford city, in Maine . There is still a Muslim cemetery there.

6.    Biggest mosque in the U.S. belongs to Shia Muslims

The Islamic Center of America in Dearborn, Michigan state is considered as the biggest mosque in the U.S. Although it belongs to the Shiite creed, it also allows the presence of Sunni Muslims. Though the mosque dates back to 1964 and is deemed the oldest Shiite mosque in the U.S., it was rebuilt and inaugurated once again in 2005. Today it can host 3000 prayers. Hassan Al-Qazwini, an Iraqi scholar, is the Imam of this mosque. Dearborn, the city housing the Shiite mosque, is considered as the U.S. location where Shiite population is significantly concentrated. They mainly originate from Iraq and Lebanon.

8.    First Muslim in the United States was Moroccan

Estevanico (known also Mustapha Zemmouri or Said Ben Hdou) was a Moroccan born in 1500 in Azemour city. He is considered the first Muslim to set foot on the American soil. Estevanico was an Amazigh, bought by Portuguese from the slaves market when he was still young, then sold to the Spaniards. He contributed to the discovery of the state of Florida and other southern states, as well as Mexico for the benefit of the Spanish empire. Out of 600 men who were sent to explore the New World, Estevanico was among the remaining 4 survivors in the 8-year long venture, led by famous Spanish explorer Pánfilo de Narváez.

9.    Bilali: An Imam who combated the British in Georgia state

Bilali Mohamed (or Ibn Ali Mohamed) was a Muslim slave brought from Western Africa (Guinea) to Sapelo Island, Georgia, in 1803. He was the imam of 80 Muslim slaves working in a greenhouse on the island. He was then appointed director of the greenhouse. In the war of 1812, Bilali was able to lead the workers in the green house to fight against British soldiers on the island. Bilali was known for fasting Ramadan, praying the five daily prayers, and wearing a Kaftan. In 1829, Bilali wrote a document now recognized as “the Bilali document,” which is a handwritten, Arabic manuscript on West African Islamic law. The document is currently housed in the Hargrett Rare Book & Manuscript Library at the University of Georgia.

10.   Omar Ibn Said: a Muslim scholar enslaved and brought to the U.S.

Born in 1770, Omar Ibn Said was a Muslim scholar from Senegal. He was born among a family of knowledge lovers and spent 25 years learning from the most distinguished scholars. In 1807, he was arrested during a military battle. He was then enslaved and taken to the U.S, where he lived in South and North Carolina states. Although he remained a slave for the rest of his life, Ibn Said wrote 14 works in Arabic on Islam and history, along with his autobiography in 1831.