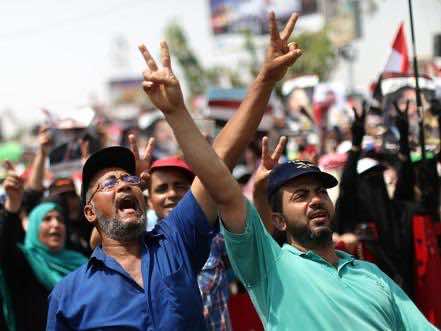 The United States on Wednesday urged Egypt to respect freedom of assembly after authorities gave the green light for a new crackdown on supporters of ousted president Mohamed Morsi.

“We have continued to urge the interim government officials and security forces to respect the right of peaceful assembly. That obviously includes sit-ins,” State Department spokeswoman Marie Harf told reporters.

“We’ve made that point publicly and privately, and we’ll continue to do so,” she said.

She declined to state whether the United States specifically raised concerns about the latest orders.

The United States has repeatedly called on Egyptian authorities to exercise restraint after the army on July 3 threw out Morsi, an Islamist who was the country’s first democratically elected leader.

But President Barack Obama’s administration has refrained from calling Morsi’s overthrow a coup, a designation that would require the United States to halt its $1.5 billion in annual aid to Egypt.

“We believe the continued provision of assistance to Egypt, obviously consistent with our legal obligations, is important to our national security interests and to our goal of advancing Egypt back towards an inclusive democratic process,” Harf said.

US ally Israel has been supportive of maintaining assistance, believing that the army can help maintain peace and curb militants.