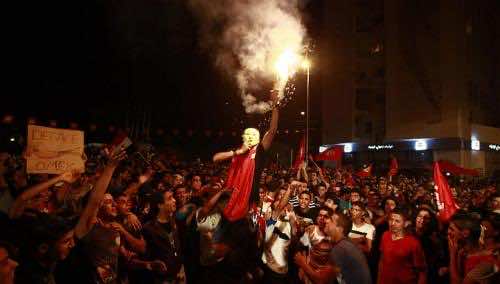 Tunisia said its forces killed a “terror” suspect in a dawn raid Sunday and separately foiled a political assassination like the one that has plunged the country into crisis.

The announcements came after rival protests for and against the Islamist-led coalition government, with the opposition demanding the resignation of the cabinet and the dissolution of the National Constituent Assembly.

The calls have mounted since the murder nearly two weeks ago of opposition MP Mohamed Brahmi, the second anti-government politician gunned down in Tunis since Chokri Belaid was assassinated in February.

Officials have said the same gun was used in both killings and pointed the blame at jihadists.

On Sunday, Prime Minister Ali Larayedh announced the first arrest of a suspect in the Belaid case, without elaborating.

He also called for jihadist militants hiding out near the Algerian border to surrender.

“Hand over your arms, turn yourselves in to police, and then police and society will take that into account,” he said, quoted by state news agency TAP.

The interior ministry, meanwhile, said the dawn raid targeted a house in the southern Tunis suburb of Ouardia where a group of “key terror” suspects was hiding.

“One of the members of the group was eliminated in an exchange of fire, and four were arrested,” the ministry said in a terse statement that did not spell out why the suspects were wanted.

Overnight, the ministry said police had foiled a new bid to assassinate a political figure and that two “very dangerous terrorists” had been arrested and guns and grenades seized.

The ministry did not identify the target of the plot but said it had taken place in Sousse, 140 kilometres (87 miles) south of Tunis, on Friday.

Police traded fire with gunmen after searching a house in the area, and a third suspect fled, it added.

The security force operations came as Tunisia’s moderate Islamist Ennahda party was battling to defend its position as the head of a governing coalition after winning an October 2011 election.

Late on Saturday, tens of thousands of Ennahda backers turned out for a rally in Tunis called by the party to voice their support for the embattled government.

The crowd, gathered in Kasbah Square where the government offices are located, chanted: “Legitimacy,” “The people want Ennahda,” and “God is greatest”.

The protest, in which Ennahda said 200,000 people took part, was by far the largest in support of the government since the July 25 murder of Brahmi and February’s murder of Belaid.

Elsewhere in Tunis, several thousand opposition demonstrators gathered outside the parliament building for what has become a nightly protest, witnesses said.

A coalition of opposition parties has called for a massive rally on Tuesday to demand the departure of the government and the dissolution of the national assembly.

Larayedh, who has already proposed a broader coalition and general elections for December, on Saturday reiterated that his government would not step down, and told a news conference Tunisia needs “national unity”.

But dozens of deputies have boycotted the assembly since Brahmi’s murder, further delaying the drawing up of a new post-revolution constitution.

Meanwhile, the army stepped up an offensive launched in December in Mount Chaambi, near the border with Algeria, against Al-Qaeda-linked militants.

Larayedh refused on Saturday to give details of the operation but an armed forces spokesman said it involved ground and air units.

The army has come under a spate of attacks since April and the spokesman said the operation would continue until Islamist militants “are eradicated”.

The latest operation follows the July 29 gruesome discovery in the area of eight soldiers with their throats cut after an ambush by militants.