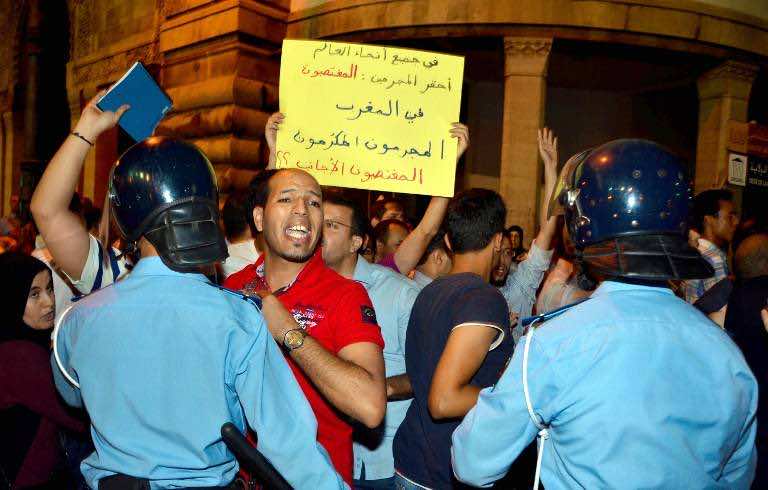 What is the purpose of law? While law serves humanity for multiple purposes, a general consensus can be reached that law is primarily established within a society to ensure the protection of the rights and freedoms of its people, given that they pose no threat to the public. The Universal Declaration of Human Rights, which sets a standard of achievement for all nations, states in its very first article that “All human beings are born free and equal in dignity and rights.” Recent cases of law enforcement have revealed irreconcilable discrepancies with such international standards.

Recently, a young man has reportedly been arrested and condemned to a three month prison sentence for smoking publicly during daylight in the holy month of Ramadan. Such ruling has spurred heated debate amongst Moroccans with polarized views on the case. Surely, this young man could have used some respect and thought for our culture and religion. The Holy Month of Ramadan is a distinguished month that is not only an owing debt to Allah for Muslims, but is a unique aspect of our culture that defines our identity.

From its first day to its last, it almost feels like Ramadan leaves its taste in the air we breathe. From the smell of the delicious harira and rghaif being prepared all day, to the sudden silence that reigns the streets as the sun gets closer to bidding its farewell as we listen carefully for the long-awaited Adan, to the not so brain feeding TV shows that invade our Moroccan channels at home, to the streets all coming back to life after lftour when people have finally satisfied the thirst and hunger of their patient stomachs, and to the early morning tiptoeing to the kitchen before sunrise for a sip and a bite that could spare you some thirst and starvation for the next day. Ramadan is indeed a sensational experience that brings along its spirits and unifies us as friends, as families, as a people. Ramadan is one of the many beautiful aspects of our country that enriches our culture and makes it a distinct one. We, therefore, have a duty to value and preserve our culture not only because it is precious, but because cultural diversity is what makes our world a beautiful place and is crucial to cross-cultural understanding and tolerance, which pave the way to international peace. And this young man has clearly overlooked this precious cultural aspect of our society.

Nevertheless, I recall that law is intended to protect the rights and freedoms of the people. A law that infringes upon one of these fundamentals defeats its own purpose. And the law responsible for the imprisonment of this young man does precisely that – infringe upon his freedom. It interferes with one’s personal freedom of practicing the religion of one’s choice in one’s own way. It meddles with one’s personal right of holding a choice of her/his own cultural and traditional practices. And these are fundamental basics of human rights. One cannot impose on another a religion or a culture. One has the freedom to practice, or not, the religion and the traditions of her/his own choice. Sentencing an individual to prison for not practicing the mainstream religion and traditions is a violation of one’s personal freedom.

The unique condition under which human rights are subject to limitations is when such rights pose a threat to the public or interfere with another individual’s rights. And so, how does an individual publicly not observing Ramadan harm the public? And how does it interfere with another individual’s right to observing Ramadan or one’s right to anything for that matter? At its worst, the act of publicly not observing Ramadan is nothing more than a lack of respect to our society. But one cannot be imprisoned for such lack of respect at the cost of her/his basic human rights, for these remain a priority. The law condemning public consumption during our holy month is deeper than a mere shield over our precious culture and traditions. It reflects our lingering position in the domain of human rights and points to the abundant room left for more human rights that our citizens have yet to enjoy.

A few in favor of this ruling have argued that since the law has been violated, the sentence is fair, and the story ends there. Indeed the subject violated the law, but has not the law violated the subject? If our ancestors dismissed every law as fair, would we not still be in an era where atrocities such as slavery prevailed? But, fortunately, because someone, one day, stood up to point out that the law subjecting one individual as a property of another based on race, is a violation of human rights, we are spared from slavery. By the same token, the law depriving an individual from adhering, or not, to the religion, culture, and traditions of her/his choice which pose no threat to the public, is a violation of human rights.

An even more recent case further illustrates our flawed law enforcement in its severest form. A Spanish pedophile, namely Daniel Galván Viña, who was convicted of crime in 2012 due to the sexual abuse of 11 children in Morocco, was also granted a royal pardon a few days ago that bailed him out of his 30-year sentence he never served. Such a scandalous move from our part has justifiably fuelled uproar across the country and received the international attention of appalled observers. His royal highness King Mohamed VI, may God assist him, has responded with proclamations of his unawareness of the the criminal’s atrocities. Others have resolved the pardon being nothing less than a product of diplomatic agreements following complicated political affairs between the Moroccan and Spanish authorities. In either case, I am still debating on which is worse, that a Spanish pedophile serial rapist has been liberated or that criminals were granted freedom without thorough verification of their criminal histories by our authorities. Either case reveals our country’s nonchalance towards its citizen’s protection and either case results in neglected rights of the most precious people – our children.

Human rights abuse is taken further down the road as citizens react to this scandal. Peaceful protesters in Rabat have encountered resistance by violent police who left dozens of citizens injured despite Abdelali Hamieddine’s statement that “Moroccans have the right to demonstrate when they feel humiliated and the authorities don’t have the right to react so violently.” This leaves us further questioning our country’s status on law enforcement and human rights.

It is needless to say that these two demonstrative cases are but a sample of our country’s daily law enforcement routine. They reflect the irreconcilable discrepancies existing between applied law and just law, between de facto and de jure. And when citizens are imprisoned for not observing a religious holiday in public, while pedophile foreigners are bailed out of prison after raping our children on multiple occasions, one can not help but ask, do people violate law or does our applied law also violate the people?

Nouhaila Chelkhaoui is a Moroccan national. She studies political science and sociology at the University of Toronto, Canada.