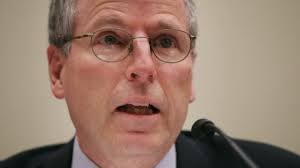 Ford is best known for actively challenging Syrian President Bashar Assad and meeting with protesters when he was the U.S. ambassador in Damascus 2011-2012. He was withdrawn when security markedly deteriorated in the war-torn country.

The Times, citing unnamed U.S. officials, said that Kerry has recommended Ford for the job. President Barack Obama would have to approve the recommendation, and then Ford would still need approval by the senate before starting.

Other postings include Bahrain and Cairo, where he worked in the economic section of the U.S. embassy, according to a State Department biography.

Ford would replace the current envoy, Anne Patterson, who has been ambassador since 2011 and was recently nominated for a senior State Department post.