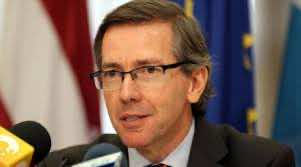 Fresh international efforts were underway in Egypt on Monday to find a peaceful end to the crisis sparked by the military’s overthrow of Islamist president Mohamed Morsi.

Both envoys have engaged in a series of meetings with  Morsi loyalists and
members of the army-backed interim leadership including army chief Abdel
Fattah al-Sisi.

According to the official MENA agency, Burns and Leon were accompanied by top diplomats of Qatar and the United Arab Emirates during the visit to Shater at Cairo’s high security prison in Tora.

But Muslim Brotherhood spokesman Gehad al-Haddad said Shater refused to speak to the delegation, saying only that the Brotherhood’s position on defending Morsi’s legitimacy is “unchanged”.

The powerful Shater, one of the main financiers of the Muslim Brotherhood, is due to face trial on August 25 along with senior Brotherhood leader Rashad Bayoumi and Brotherhood Supreme Guide Mohammed Badie, who is currently in hiding.

The three are accused of inciting the killing of protesters during clashes outside the Brotherhood headquarters in Cairo in June.

Morsi himself has been formally remanded in custody on suspicion of offences committed when he escaped from prison during the 2011 revolt that toppled former president Hosni Mubarak.

US Senators John McCain and Lindsay Graham are expected in Egypt for a series of talks on Tuesday, in a fresh push for a solution.

In Cairo, hundreds of Morsi loyalists marched to the High Court, calling for the release and reinstatement of their leader, blocking traffic in the centre of the capital.

Supporters of Morsi — Egypt’s first freely elected president– see his ouster by the military as a violation of democracy and insist on nothing short of reinstatement.

The interim leaders however say there is no turning back on the army-drafted roadmap announced after Morsi’s ousting on July 3 and which provides for new elections in 2014.

Both the interior ministry and the army have repeatedly called on pro-Morsi protesters to lift their sit-ins which have paralysed parts of the capital and increased divisions in the country.

Authorities have promised Morsi loyalists a safe exit and said an end to their protests would allow the Muslim Brotherhood to return to political life.

On Sunday, Sisi met Islamist leaders to try to mediate a solution with Morsi supporters.

Among those attending the talks were influential Salafist clerics Sheikh Mohammed Hassan and Mohammed Abdel Salam, who just days ago addressed pro-Morsi supporters at a rally.

But Yasser Ali, a spokesman for the pro-Morsi demonstrators, said the clerics had met Sisi “without having been mandated”.

Burns had also met with members of the Brotherhood’s political arm, which later stressed its continued commitment to “legitimacy, which stipulates the return of the president, the constitution and the Shura Council,” or upper house of parliament.

During his visit, the US envoy sat down with Foreign Minister Nabil Fahmy in a bid to broker a compromise as Washington kept up the pressure from afar, with Defence Secretary Chuck Hagel urging Sisi to support an “inclusive political process”, the Pentagon said.

The diplomatic push came as the Washington Post published an interview with Sisi in which he urged Washington to pressure Morsi supporters to end their rallies.

Sisi said that police, not the military, would be charged with dispersing the protests, and insisted that millions of Egyptians “are waiting for me to do something”.