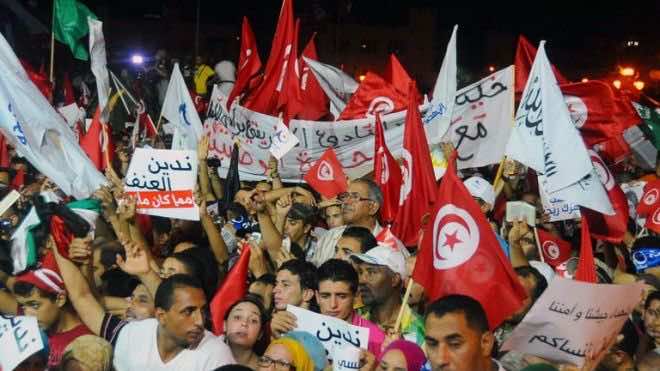 Police used batons and tear gas against protesters who tried to break into local government offices in the centre-west city of Sidi Bouzid, cradle of the 2011 revolution.

An AFP journalist said security forces also fired warning shots to disperse several dozen people demonstrating against what they called the incompetence of the local governor.

The governor is close to the ruling Islamist Ennahda party.

In addition to being where Tunisia’s Arab Spring began in late 2010, Sidi Bouzid was also the home town of opposition MP Mohamed Brahmi, gunned down in the capital on July 25.

Brahmi’s was the second political assassination this year, coming after the February murder of Chokri Belaid, also in Tunis.

Many Tunisians blame the government for both killings.  At the end of July, hundreds of protesters tried to block civil servants in Sidi Bouzid from going to work, and police used tear gas against stone-throwing demonstrators.

The demonstrators were then also demanding the dismissal of the governor.

Government detractors say the Ennahda-led cabinet has failed to rein in radical Islamists who have grown in influence and stand accused of a wave of attacks since the 2011 uprising that toppled strongman Zine El Abidine Ben Ali.

An opposition coalition planned another demonstration in Tunis later on Monday, as well as a major night-time protest on Tuesday demanding the government’s resignation and the dissolution of the National Constituent Assembly.

Tuesday’s protest will also mark six months since Belaid’s killing, and is an opposition response to a massive pro-government rally in the capital on Saturday.

Ennahda has already appealed to opposition parties to join the governing coalition.

Prime Minister Ali Larayedh has also proposed a general election in December, although he has insisted the government will not heed opposition calls to step down immediately.

In an interview published by Belgian daily Le Soir on Monday, party leader Rached Ghannouchi appealed to government and opposition supporters alike to stop taking to the streets to make their point.

He called instead for a referendum to give voters the chance to have their say.

“Tunisians would pronounce on whether they support or oppose the process under way,” the veteran Islamist leader said.

As the political crisis festers, with no immediate way out in sight, security forces are pressing their hunt for militants linked to Al-Qaeda holed up in the rugged Mount Chaambi region near the border with Algeria.

Two soldiers killed when their armoured vehicle was hit by a roadside bomb on Sunday were buried after a memorial ceremony attended by both Larayedhn and President Moncef Marzouki.

The military has been hunting the militants since last December, but stepped up its offensive after eight soldiers were killed in an ambush on July 29 and had their throats cut.

On Sunday, the prime minister called on the jihadists hiding out near the border to surrender.

Foreign Minister Othman Jarandi was to travel to Algiers on Tuesday for security talks with his Algerian counterpart Mourad Medelci.

The National Constituent Assembly is to meet on Tuesday to discuss the threat facing the country after security forces killed a “terror” suspect in a dawn raid on Sunday.

Interior Minister Lofti Ben Jeddou said that security forces had also arrested Ezzedine Abdelaoui, who is suspected of involvement in Belaid’s murder, during the raid.

But dozens of deputies continue to boycott the assembly in protest at the two opposition politicians’ murders.