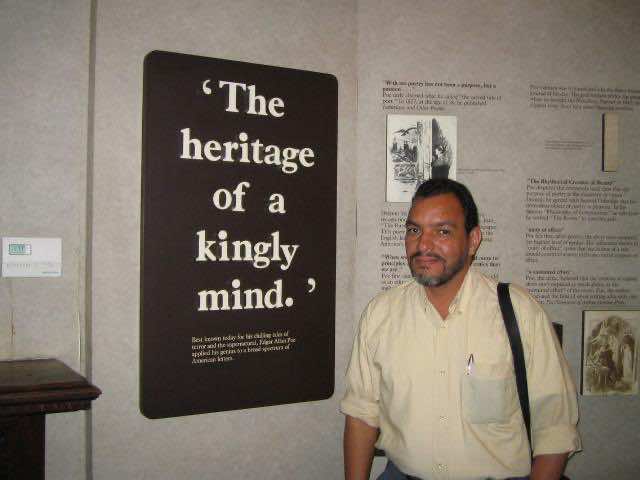 In Newark, Delaware there is a famous tavern called Deer Park that witnessed a certain part of Edgar Allan Poe’s life, I was told. As you walk by Deer Park, you will not fail to notice a figure drawn on the pavement, it is a portrait of Edgar Allen Poe. The artist who has drawn the charcoal figure has made it look pretty much intriguing and awe inspiring. The portrait was half and half that of a living person and a hollow eyed skull drawn in a precisely symmetrical manner.

Deer Park was one of Poe’s favorite places where he stopped by for a pint or two and a good time. In that manner it is a historical site where Poe’s fans gather for drinks, I suppose. At Deer Park, you can also see great Harley Davidson motorcycle fans with tattooed arms as frequent customers of the tavern. I continuously had to go past the place as it was on my way from Main street Newark to Pencader campus where I lodged with other Moroccan colleagues. In that sense Deer Park was part of our surrounding social environment. Linking the place to a world renowned writer and a great figure of American literature is a great investment to attract great numbers of customers. Crossing Delaware State into Pennsylvania, we found ourselves in Philadelphia where more is going to be revealed about this great literary figure.

Touring historic Philadelphia took us back in history to the early making of the American nation. We had a chance to see historical sites and the tour guide linked each of them to past events that were very significant landmarks in the making of American history. We, Moroccan teachers contributed to discussions and took the opportunity to stress the fact that the Kingdom of Morocco was the first state to acknowledge the independence of the United States. The friendly historical ties between our nations date back to 1776. The date the US was declared an independent country from the British Crown.

While in Philadelphia, we had a unique chance to visit Edgar Allen Poe’s house. Before you could enter the house, you will be greeted by the statue of a “The Raven” that is standing on a pole not far from the house. The gentleman who gave us a tour of the place talked about Allan Poe, his family life and his works and successfully brought to life our memories of the Fall of the House of Usher, Murder at the Rue Morgue, the Raven, the cask of Amontillado, the Black Cat and so on. The tour guide has successfully managed to whet our appetites for further readings of Edgar Allan Poe’s works. I did not fail, when we got back upstairs from the cold and gloomy basement, to spend some time in the entrance hall to the house where some of Poe’s quotes where displayed on the walls of the hall. I will mention some of them before I close this part of “The Cultural Journals”. Here are a few quotes:

– I have no faith in human perfectability. I think that human exertion will have no appreciable effect upon humanity. Man is now only more active – not more happy – nor more wise, than he was 6000 years ago.

– Never to suffer would never to have been blessed.

– Convinced myself, I seek not to convince.

– All that we see or seem is but a dream within a dream.

With a chill that goes through your bones, you will leave that house only to be greeted once more by the famous raven bidding you farewell. You can only get back from that out of the common journey when you get seated in a bus that is slowly starting to move away from the place!