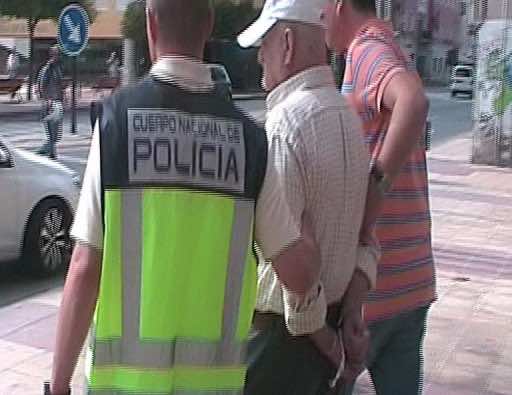 A convicted child rapist who was arrested in Spain after a pardon by Morocco’s king was revoked in the face of angry heavy protests appeared before a judge in Madrid on Tuesday.

The judge will decide if Daniel Galvan, a Spaniard found guilty of raping and filming 11 children aged between four and 15 in Morocco and sentenced in September 2011 to 30 years in prison there, returns to jail.

Galvan was arrested Monday at a hotel in the southeastern Spanish city of Murcia where he once worked at a university after Morocco issued an international arrest warrant against him.

Morocco is seeking the extradition of the 63-year-old who was among 48 Spanish prisoners pardoned by King Mohamed VI and freed last week from jail following a visit in mid-July to Morocco by Spain’s King Juan Carlos.

The pardon was revoked by the king on Sunday, two days after baton-wielding police dispersed several thousand people who tried to rally in front of the parliament in the Moroccan capital Rabat.

A royal palace statement said the king had been unaware of the nature of Galvan’s crimes and on Monday the Moroccan monarch dismissed the director of prisons after an enquiry blamed his department for Galvan’s release under royal pardon.

“The enquiry concluded that the said administration inadvertently provided erroneous information about the criminal record of the prisoner in question when requested by the royal court,” a palace statement said.

Galvan’s name appeared on a list of 30 Spanish prisoners in Morocco whom Madrid had asked to be sent home to serve out their sentences, a source close to the dossier told AFP.

The Spanish embassy in Morocco also sent a separate list of 18 people it wanted pardoned, the source added.

Galvan arrived at Spain’s top criminal court, the National Audience, in Madrid on Tuesday morning in a blue and white police van for his hearing.

Judge Fernando Andreu will decide if he is put in jail, released without any restrictions or under judicial control while a decision is taken whether or not to extradite him to Morocco, a judicial source said.

Spain and Morocco do not allow their citizens to be extradited to each other’s country and an exception would have to be made if he is sent back to the north African nation.

The case is also complicated by the fact that in Spain the government can not revoke a pardon.

The affair has caused embarrassment in both Morocco and Spain, with questions being raised about Galvan’s background.

Daily newspaper El Pais reported that Galvan told his Moroccan lawyer that he was a former official in the Iraqi army who had worked with foreign secret services to oust Saddam Hussein.

The name Daniel Galvan was “an identity that was fabricated by secret services when they got him out of Iraq, they provided him with Spanish documentation and converted him into a retired professor from Murcia,” the newspaper added.

Galvan was a fellow at the University of Murcia between 1996 and 1998 and had a work contract at the institution’s international relations department from 1998 to 2002, a spokesman for the university said.

Galvan, who is of Iraqi origin, moved to the Moroccan port of Kenitra in 2005 and he told his neighbours there that he was a retired professor, daily Spanish newspaper El Mundo reported.

The Moroccan justice ministry said Galvan and the 47 other Spanish prisoners received the royal pardon in response to a request from Spain’s king.

But Spain’s royal household said Juan Carlos had not asked for the release of Galvan or any other Spanish prisoner during his visit and had only shown interest in the wellbeing of Spanish nationals held in prisons in the north African country.