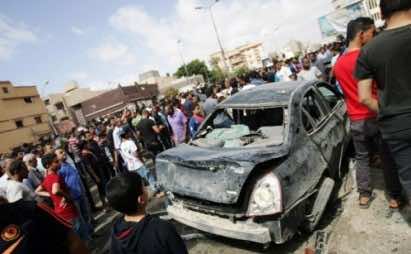 A bomb exploded under a car Tuesday in Libya’s Benghazi killing the driver, a security official told AFP, the latest in a wave of violence to hit the restive city.

The Mediterranean city in eastern Libya has been plagued by deadly violence since the 2011 uprising which toppled dictator Moamer Kadhafi, with attacks mostly targeting the security forces and judges.

But Tuesday’s bombing appeared to be criminally motivated, said security forces spokesman Colonel Mohamed al-Hijazi, adding that the victim was a civilian.

He identified him as Hamed Ali al-Warfelli and said he was killed when an explosive device under his car blew up.

“The blast was very loud and the victim’s body was burned to a cinder… It took more than an hour to identify him,” Hijazi said.

“Initial results of the investigation indicate it could have been a settling of scores,” he added, without giving details on the victim.

Benghazi has seen a wave of attacks since Kadhafi’s fall, blamed generally on radical Islamists, who have also hit Western targets.

Last September 11, US ambassador to Libya Chris Stevens and three other Americans were killed in an attack on Washington’s consulate in Benghazi. And an attempt was made on June 5 to kill Jean Dufriche, France’s honorary consul in the city.