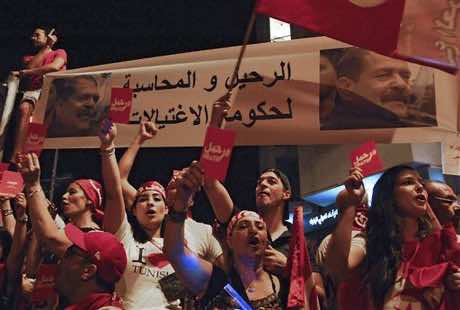 Tunisian newspapers said Wednesday the country’s Islamist rulers and their detractors must open a dialogue on ending the political crisis gripping the North African state before it’s too late for negotiations.

Tens of thousands of people poured onto the streets of Tunis overnight to demand the government’s resignation, as the crisis deepened with the suspension of Tunisia’s elected National Constituent Assembly (ANC).

“We must go from a showdown on the squares and in the streets to a confrontation through arguments,” said La Presse.

Le Quotidien, a daily that is highly critical of the Islamists, said “everyone is unanimous as to the seriousness of the situation” and urged the moderate Islamic movement Ennahda which heads a ruling coalition to make real concessions.

“The hour of compromise has come and these concessions, which have been coming at a snail’s pace, must be expanded to save the country while there is still time,” the paper said.

Tunisia has been wracked by political unrest since the July 25 murder of opposition MP Mohamed Brahmi and Tuesday’s protests marked the biggest anti-government rally since the assassination.

Earlier on Tuesday, the ANC — a body elected in 2011 to forge consensus on drafting a new constitution — was suspended.

Brahmi’s murder, as well as that of another opposition politician, Chokri Belaid, have been blamed on radical Islamists, with the Ennahda-led cabinet criticised for not doing enough to prevent them.

Protesters carried pictures of both Belaid and Brahmi and shouted slogans such as “The people want the regime to fall” and “The government will end today”. The march passed off peacefully.

Assembly speaker Mustapha Ben Jaafar said the ANC’s work would be halted until the government and opposition opened negotiations to break the deadlock “in the service of Tunisia”.

The stalemate showed no sign of ending, however, with the opposition refusing to hold talks with the government until it steps down and Ennahda ruling out any dialogue conditional on its ouster.

Prime Minister Ali Larayedh has refused to quit, offering instead to broaden the coalition.

Since the ANC was elected in October 2011, political leaders have failed to hammer out a consensus on a new constitution following a revolution that ousted longtime president Zine el Abidine Ben Ali.

And the suspension of the assembly’s work throws into question Larayedh’s target of the ANC adopting a new constitution and electoral law by October 23 ahead of a December 17 election.