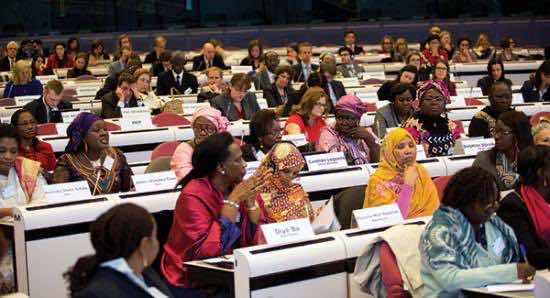 “If you want to be influential in the political arena, you need to influence policy,” Betty Kaari Murungi, a social justice advocate, recently told a room filled with female entrepreneurs and corporate managers in Nairobi, Kenya.

A lawyer by profession, Ms. Murungi is the director of Urgent-Action Fund Africa, a feminist human rights advocacy group, as well as former vice-chair of the Truth and Reconciliation Commission of Kenya, and has worked on gender justice issues in Africa. It was women of Ms. Murungi’s calibre who sat in the audience of the S.H.E (She Helps Empower) summit, convened in June in Nairobi to provide an opportunity for women to share their leadership advice and tips on how to expand businesses and careers.

“Women make business sense,” said Carol Odera, a Kenyan fashion guru and writer for True Love magazine. “We are not here to fill a quota,” she added “We hold up half the sky…except in senior management.”

The UN says that women make up a little over half of the world’s population, yet they have unequal access to resources, education and income because they participate less in policy decision-making. They are often the backbone of societies, making up the majority of agricultural labourers.

The World Food Programme, a UN food agency, found that eight out of ten people engaged in farming in Africa are women, and they are the sole breadwinners in one out of every three households. Also, more women than men operate in the informal sector.

Businesses run by women, mainly informal commercial trading businesses, are increasing in Africa, although there is very little research on them, writes Maxwell Awumah for SciDev.Net, a news outlet about science and technology for global development. Even though the informal sector presents an opportunity for generating reasonable incomes, the African Development Bank says most workers are without secure incomes and lack social protection. In fact, the International Labour Organization has coined the termworking poor for people in the informal sector, who are mostly women.

In spite of the significant increase in girls’ enrolment in primary and secondary schools (and even at the tertiary level outside sub-Saharan Africa), the number of jobs held by women is not increasing. The low level of female employment is a cause for concern, observes the World Bank. Understanding their legal and reproductive rights could help empower young girls and women.

Many highly successful African women have climbed the ladder either as activists or by using their entrepreneurial skills. One such example is Senegal’s Magatte Wade, chief executive officer of a manufacturing company that produces herbal drinks and organic coffees and teas sold across the U.S. In 2011, Magatte’s company, Adina Inc., had over US$3 million in annual revenues, according to a UN Development Programme-led research paper on successful business models on employing the poor. While a World Bank report on women in the workforce says women’s participation in the economy should be an impetus to greater political participation, this is not often the case in Africa.

Whether in political bodies or corporate boardrooms, women have a limited say in decisions that affect them, notes the UN agency on gender equality known as UN Women. To improve this situation, most developing countries have introduced quotas and other temporary special measures, such as reserved seats, to help women climb the political ladder, a trend that took off following the 1995 Beijing UN Fourth World Conference on Women. About 20% of all parliamentarians around the world are now women, according to the 2013 UN Millennium Development Goals report.

Some countries are faring better. Following a high-profile election campaign in Kenya in March 2013, one-fifth of parliamentary seats went to women, doubling their representation.

The growing number of female lawmakers is not the only encouraging sign on gender equality in Africa, writes Rainitou Sow from Make Every Woman Count, an organization that advocates for women’s and girls’ empowerment. Most countries now have gender policies and government ministries are being tasked to implement them.

And it appears the effort is paying dividends. More African women are now entering public office than ever before, including the highest offices. Joyce Banda of Malawi recently became Africa’s second female president, joining her Liberian counterpart, Ellen Johnson-Sirleaf. The Liberian leader has also been awarded the Nobel Peace Prize, which she shares with her compatriot and fellow peace activist Leymah Gbowee and Yemen’s Tawakkol Karman. The late Wangari Maathai, a Kenyan environmentalist, was the first African woman to receive the honour. For the first time in its history, the African Union Commission is headed by a woman, South Africa’s Nkosazana Dlamini-Zuma. Another South African, former vice president Phumzile Mlambo-Ngcuka, has been appointed head of UN Women. Elsewhere on the continent, several countries (such as Zimbabwe and Gambia) have female vice-presidents.With the aid of a UN Security Council resolution, passed in 2000, that addresses the excessive impact of war on women, as well as the pivotal role they play in resolving conflicts, more women are serving in UN peace operations around the world – but still short of expectations. For example, in 2013, women comprised less than 4% of global peacekeepers.

Given the increasing number of female legislators, and women’s defining role in the economy, one might think that women in Africa would have more influence on policies that directly concern them. However, cultural practices and deep-seated traditions have been hard to budge.

Undaunted, some legislators have pushed hard and succeeded in introducing laws that benefit women in their daily lives. For example, Angola enacted a law in 2011 to criminalize domestic violence, and Kenya joined 24 other African countries in making female genital mutilation illegal. But progress has been less pronounced in some other countries. For instance, a family law bill proposed in Mali in 2009 that would have promoted women’s rights was withdrawn after being blocked by conservative Muslim groups. It was finally signed into law three years later, after having been “substantially watered down,” according to reports.

Land rights for women are also highly resistant to reforms (see  HYPERLINK “http://www.un.org/africarenewal/magazine/special-edition-women-2012” Africa Renewal Special Edition on Women 2012). A glaring example is that women farmers in Africa have no leverage over agricultural policies in their countries and little access to credit, fertiliser and seeds, although they produce most of the food.

As the number of women in executive positions continues to grow in Africa, they must find ways to translate their presence in politics into action and influence. Enlisting the support of men across government bodies is one way to effect reforms. Simply put, political gender quotas in Africa are not enough to amplify the voices of women.