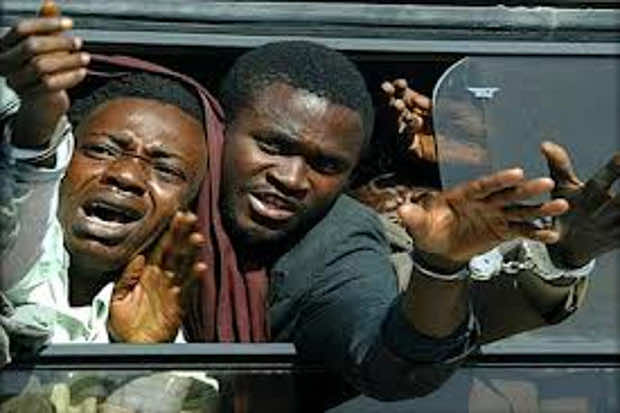 By
Anna Jacobs
-
Anna Jacobs graduated from the University of Virginia with degrees in Government, Foreign Affairs, and French literature.
Aug 8, 2013
Spread the love

According to various Moroccan and Spanish news outlets, two horrific events occurred in Morocco this past week. The event was also attested to by Marcel Amiyoto, a Congolese refugee and well-known activist for migrants and refugees in Morocco.

According to testimonies, a Congolese national named Toussaint-Alex Mianzoukouta, who worked as a French teacher in a private school in Rabat, was on his way to visit friends in the Boucalef district of Tangier. He was caught up in a police raid in this area and arrested, along with many other migrants of sub-Saharan origin. He was arrested despite his legal documentation for residency in Morocco. He had his residency permit (A045872F) and his receipt for renewing it, rendering him perfectly in line with the law. He was not allegedly allowed to show his documents and was loaded into a small van with others.

The destination was a desert area near the border city of Oujda, as is so often the case when Moroccan police systematically round up sub-Saharan migrants based on their skin color and with little regard for their legal status.

According to Afrikonline sources who were witnesses of this scene, a dispute broke out in the van, and Mr. Mianzoukouta was “pushed out of the van by a Moroccan policeman.” He was then transferred to Mohammed V hospital in Tangier, but he died six days later on July 30, 2013.

He is survived by a wife and two children living in France. The police account contradicts that of the other migrants who were present. The security forces claimed that the Congolese national was in a bad state of health because he had been beaten up by a group of thugs.

Lakome is also reporting that a sixteen year old Ivorian girl named Tina Melon has accused four policeman of harassing and raping her in a forest near Tangier, on August 1. The Moroccan Association for Human Rights and Chabaka, a local NGO that defends migrants rights in Tangier, have issued press releases about the event and are supporting her legal claims. Such a revolting display of exploitation has been testified numerous times in the last decade by International groups such as Doctors without Borders, as well as a host of Moroccan civil society groups.

Police aggression and racial profiling of sub-Saharan migrants has been especially well documented by the Antiracist group for the support and defense of foreigners in Morocco (GADEM). GADEM is the only non-governmental organization in Morocco that specializes in the human rights of foreigners in the Kingdom. They assert that this systematic violence at the hands of Moroccan security forces has increased throughout Morocco, especially in border areas in the Northern region. This includes cities such as Tangier and Nador, which is located near the Spanish enclave of Melilla. Such violence, they argue, violates Morocco’s international legal commitments, its own domestic law, and basic principles of humanity and justice.