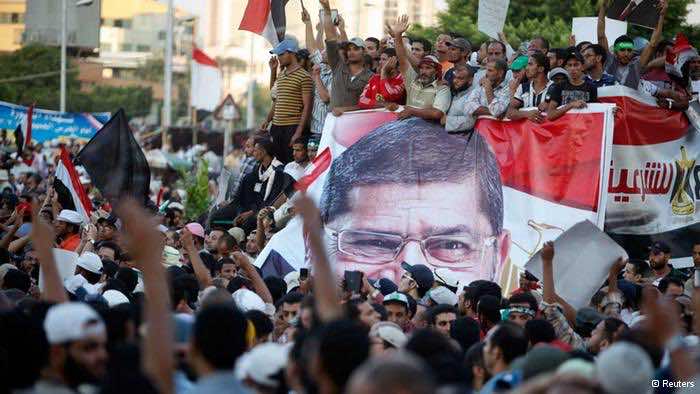 Thousands of supporters of Egypt’s ousted Islamist president Mohammed Morsi Thursday celebrated Eid al-Fitr, the end of the Muslim holy month of Ramadan, defying government calls for them to leave the streets.

However there was no immediate sign that the government was readying to carry out its threat made Wednesday to remove Islamist protest camps set up to demand Morsi’s reinstatement following his ouster by the army on July 3.

Under a cloud of balloons, thousands of men, women and children attended the dawn prayer marking the end of the fasting month in the Rabaa al-Adawiya and al-Nahda squares, where Morsi’s supporters have been camped for weeks calling for his reinstatement.

Egypt’s army-installed government vowed on Wednesday to remove the protest camps, saying it had refrained from doing so out of “solicitude for the holy month of Ramadan.”

But leaders of the Muslim Brotherhood from which Morsi hails called for rallies “until victory,” raising fears of further bloody confrontations.

Several thousand supporters of the ousted president also marched in other parts of Egypt, including in Alexandria, the country’s second city, and in Qena in the south.

The warning to the protesters came after Egypt’s interim presidency said on Wednesday that Western and Arab efforts to mediate an end to the country’s political deadlock had failed.

Authorities have promised demonstrators a safe exit and said ending their protests would allow the Brotherhood to return to political life.

More than 80 protesters were killed in clashes with police at the main sit-in outside Cairo’s Rabaa al-Adawiya mosque on June 27.

Over 50 people died in earlier clashes with soldiers outside an elite army base.