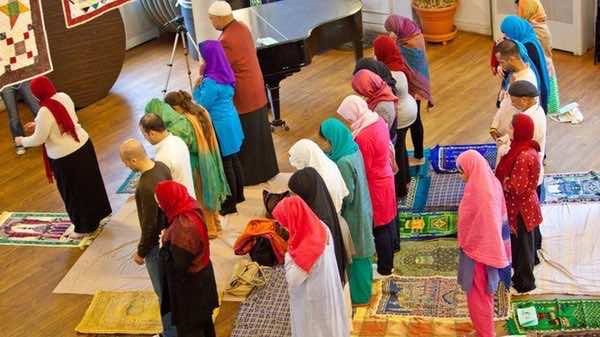 In the damp basement room of a Caribbean restaurant in London, Naima leads prayers for an audience of male and female worshippers.

They face Mecca, directed by an arrow scrawled on a blackboard in pink chalk.

But Naima — she did not want to give her full name — had just begun the Al-Fatiha when a young woman got up and hurried out of the room in Camden in the north of the British capital.

As if on cue, “Should I Stay Or Should I Go” by punk band The Clash was playing in the restaurant.

Leila Bakkioui, 25, clad in a headscarf, admitted she was reeling.

“I went downstairs to pray and a sister led the prayer,” she explained breathlessly to her friend Tana Rasekh, who was waiting for her in the restaurant.

Rasekh said: “When she came out, I thought she had seen a ghost.”

Bakkioui, a young mathematics teacher, had stumbled into a group of Muslims working towards a more “inclusive” Islam, where men and women pray in the same room, with women sometimes leading the prayers.

Tamsila Tauqir helped to launch the Inclusive Mosque Initiative (IMI) in November last year after she became frustrated by what she saw in mosques in Britain and the wider Muslim world.

She said the practices of Islam are still based on “cultural traditions of patriarchy” based on texts that were compiled “three hundred years after the death of the Prophet.”

“There is nothing in the Quran that says that women and men can’t pray together or that women can’t lead prayers,” said Tauqir, whose long black shirt with long sleeves matches her Dr. Martens shoes, while a keffiyeh is arranged around her neck.

“What you saw is not Islam. It’s corrupt,” she told AFP.

“Women can’t lead if there are men in the room. And they stay behind. When you pray you bend down and you don’t want to think ‘he is looking at my bottom’! It’s the last thing you want to think about.”

Her friend Rasekh agrees. “You can’t make things up the way you want,” said the 26-year-old mother of two.

A few tables away, a dozen IMI members were breaking their Ramadan fast.

“I understand that people are shocked because we have been taught that men and women pray separately, but I have adapted,” said Sophia, a 33-year-old French woman who works in telemarketing. She is attending the prayer group for the first time.

Even in the oppressively warm summer weather, Sophia, a tall woman who has her dark hair pulled up into a bun, insisted on wearing a green cardigan “to cover my arms” during Ramadan.

“A lot of people forget to focus on the essential things. They just do what everyone else does without taking the time to read the Koran,” she said.

She admitted she doesn’t agree “with everything that goes on around this table,” pointing to the presence of a handful of homosexual men at the session that evening.

One of her friends added: “It is contradictory to be gay and Muslim.”

IMI, which says it has 500 people on its mailing list, does not yet have a permanent home — Tauqir describes it as a “nomadic mosque.”

The group has pointedly not found a mosque willing to host their meetings.

“We meet two or three times a month and we hire rooms,” Tauqir said. “We are looking for donations to have a physical space in London and somewhere else.”

Tauqir admits she has received “dismissive” comments about the group, but insists they were not “threatening.”

When contacted by AFP for comment on IMI, two leading Islamic organizations in Britain failed to respond.

Hassan Wanini, a Kenyan man taking part in an IMI session for the first time, predicted that if the group continued to grow, “there will be a backlash.”

“But the Prophet himself suffered a lot to be Muslim. In his time he was seen as a liberal. We are just carrying on what he was doing,” he said.